MotoGP has a problem. Can 20-year-old Fabio Quartararo solve it? 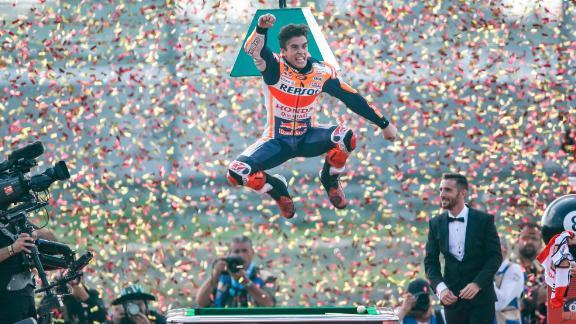 Back in 2013, MotoGP was at a crossroads. Stung by criticism that top class racing had become dull and predictable, it was undergoing a technical revolution.

First off, factory teams were obliged to share technology. Then the entire field adopted common electronics, lowering the cost of entry and removing the advantage held by the deep-pocketed big boys.

It was a shrewd move by MotoGP administrator, Dorna. More factory teams returned to the sport, gaps were cut down and wheel-to-wheel racing became more the rule than the rare exception.

But 2013 was also the year Marc Marquez burst on to the premier class scene. Then just 20, the young Catalan redefined what was possible on a MotoGP bike, winning the title at the first attempt in swashbuckling style.

Fast forward six years, and the still-young rider has been ripping up the record books ever since, clinching the championship in every subsequent year bar 2015, and wrapping up this year's competition with four races still to go.

But the statistics do not tell the whole story: while Marquez has finished in the top two in every race this season bar one -- when he crashed out in Austin -- the racing has often been breathlessly close.

The problem for MotoGP is not only that Marquez is just too good, his rivals are also inconsistent. Alex Rins, Andrea Dovizioso, Danilo Petrucci and Maverick Viñales have all managed wins in 2019, but only Rins and Dovizioso have more than one.

It is a rider without a win to his name, however, who has the paddock buzzing.

Fabio Quartararo, just 20 years old, wrapped up the Rookie of the Year competition in Japan. The Frenchman has finished second to Marquez four times this season, including a last corner loss by a matter of inches in Thailand. He has also achieved four pole positions, all while riding for a satellite team, Petronas Yamaha.

The season has already surpassed the man from Nice's expectations.

"I thought maybe we could get 50 points, that was the target," Quartararo told CNN from Japan's Motegi circuit.

"But we have already got so much more, and the team has worked really well and incredibly hard; it has obviously been a really good season, better than I could have hoped."

The Yamaha rider has had to pinch himself more than once in a dream season, not least when he first took to the track.

"As a kid growing up, Valentino Rossi was obviously the star and the rider that I followed," he explains.

"For my first practice, we went out together, and I followed him. Going out on the track with him, that was really a dream come true."

'He will be very fast'

Quartararo has not been able to call upon his idol for help, however, despite the veteran sharing the Yamaha stable.

"It is an individual sport, we have access to the data from the other bikes and so obviously we will look at that and can learn from it, but I don't really have another rider I can turn to for advice."

The rookie has not appeared to need much coaching, however.

His second place in Japan saw him overtake Rossi in the championship, leaving Viñales -- on a factory bike -- as the only Yamaha ahead of him. Rossi told reporters that Yamaha would be "crazy" not to retain the youngster's services next season.

"He is very fast, he is strong, he doesn't make mistakes," he explained.

Marquez himself agrees: "His speed, if I compare him to my opponents, he's one of the strongest ones in that area," he told reporters in Thailand.

"But he's very young. With more experience he will be very fast and consistent and will manage the situations differently. For me, he's a real contender for next year in the Championship."

The satellite rider will reportedly be offered a considerably upgraded package by Yamaha in 2020, but Quartararo appears satisfied with his year so far.

"If you had told me at the beginning of the season that I would be fighting against Marc Marquez for the victory at the last corner (in Thailand) I would have signed up immediately," he told CNN.

The question now is whether he can go one better and defeat the extraordinary world champion. It will not be easy.

Journalist David Emmett, editor of MotoMatters and one the paddock's most respected voices, likens Marquez to the great Belgian cyclist Eddy Merckx, who won the sprint jersey, the King of the Mountains jersey, and the yellow jersey in the same Tour de France.

"He has outstanding strategical and tactical intelligence, and a team around him who are focused on strategy, so they are prepared to take risks others won't," he told CNN.

But Emmett sees a generation of riders coming through who have watched Marquez's career and studied him.

"Fabio Quartararo will be his main rival, if Yamaha can find enough horsepower for the M1. But Maverick Viñales, Alex Rins, Joan Mir all have their eyes fixed on Marquez, and a healthy disdain for him as a rival, and as the man to beat.

"If the KTM improves, there's Miguel Oliveira, and Brad Binder coming through. And in 2021, a whole host of youngsters from Moto2."

The ball, Emmett believes, is in the court of the other manufacturers.

"First, they have to build bikes that are much better than the Honda, to make sure the Honda has a particular weakness Marquez can't fix with his riding."

For his part, Quartararo appears to be patient.

"You have to remember that I am just a rookie," he explains to CNN.

"Marc has been at the top for six years, but if we can keep challenging and working with the team the way we have been working so far, then anything is possible."

Emmett sees the competition hotting up for the champion.

"The trouble with being at the peak of your powers is that you can only stand still and wait for the others to catch you. Marquez will reign for a few years yet. But I suspect it won't be as easy as it was in 2019."