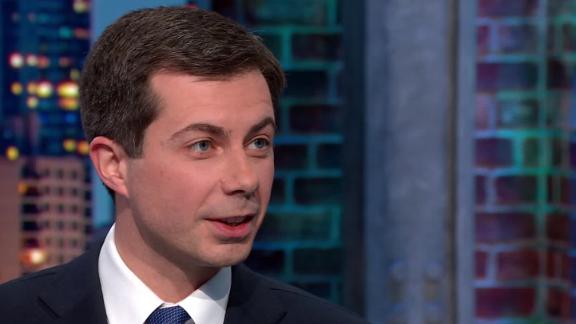 Democratic presidential candidate Pete Buttigieg tells CNN's Chris Cuomo he does not respect President Donald Trump because he doesn't respect the presidency or himself.

"He has done nothing to command my respect, I'll say that," Buttigieg said on "Cuomo Prime Time" Thursday night.

"Because he doesn't respect his own presidency. And frankly, at a deeper level, I don't think he respects himself," Buttigieg replied.

"I think he has created a sort of cartoon character, which is fine if you're a reality-TV star, where you're playing a part, even when the part is yourself."

"When you're the President of the United States, lives depend on your integrity, on your wisdom, on your judgment -- and I just don't see it in this White House," he added.

Buttigieg's pointed shot at Trump comes amid a notable campaign evolution that has seen the South Bend, Indiana, mayor increasingly take on his political rivals with sharp critiques. The clearest sign of this shift came in the CNN/New York Times debate last month.

Buttigieg squared off with Sen. Elizabeth Warren of Massachusetts on how she would pay for "Medicare for All," with Rep. Tulsi Gabbard of Hawaii on her views on war in Syria and with former Rep. Beto O'Rourke of Texas on mandatory gun buybacks. But his campaign -- at events and in paid media -- had been signaling this change in the weeks leading up to those moments on the debate stage.

Buttigieg has also leveraged his six years as an intelligence officer in the Navy Reserve, including a six-month deployment to Afghanistan, to attack Trump in a way most of his primary rivals can't.

"It helps me demonstrate the difference between how I'm oriented and how the current President is," Buttigieg told CNN of his military service in May. "We responded to the country's call to serve in very different ways."

Buttigieg added Thursday that Trump "is a guy who has shown no evidence of any principle other than that of advancing himself."

"And that is so costly right now, especially now that he's actually got this level of power," he said.

Hi: 53° Lo: 25°
Feels Like: 53°
More Weather
A sunny and very warm Wednesday across northwest Missouri and northeast Kansas. Sunny skies and above normal temperatures were found across the area Wednesday afternoon but a strong cold front has made its way into the area bringing cooler air with it.

Fauci speculates Americans could take summer vacations, but there are caveats