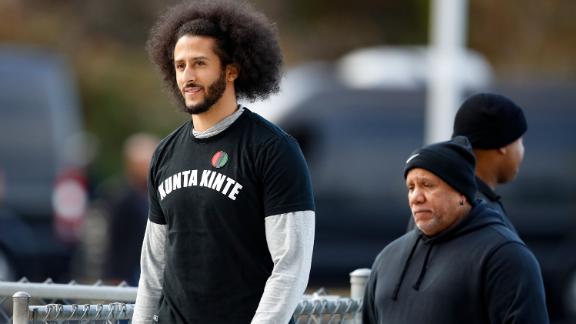 From the 'Kunta Kinte' shirt he wore to his workout to his very public calling out of the NFL, Colin Kaepernick made clear to the sport's bosses that the path to any potential reconciliation will be very much on his own terms.

Quarterback Kaepernick shunned the opportunity to workout in front of the NFL scouts that had assembled at the Atlanta Falcons facility in Flowery Branch, Georgia -- three-fourths of NFL clubs had said they would attend -- because it wouldn't have been open to the media. Instead his workout was staged at a high school football field an hour away.

Kaepernick's camp also was upset with the liability waiver the NFL wanted the player to sign, saying it was "unusual" and "addresses employment-related issues." They said the NFL rejected the standard waiver they had proposed.

On Saturday, the NFL issued a statement saying it was "disappointed that Colin did not appear for his workout," adding that "he remains an unrestricted free agent eligible to sign with any club."

On the school field in Riverdale, south of Atlanta, Kaepernick was put through his paces in front of around 300 fans and representatives from eight teams.

Kaepernick told the assembled media that the "ball was in the NFL's court" following his workout.

Eric Reid -- Kaepernick's former teammate and the first player to join him in kneeling during the national anthem in protest of police shootings of African American men and other social injustices faced by black people in the United States -- believes the quarterback's "goal was accomplished."

"It's been what Colin's been waiting on for three years," Reid said in a black top with the phrase 'I'm with Kap' and the uniform number of Kaepernick.

"We've been telling y'all he's been staying ready, he's been working out five times a week, and he proved that."

Kaepernick became a free agent in 2017 but no team offered him a contract. He filed a grievance against the league, accusing team owners of colluding to keep him from being signed. The NFL denied any collusion and they reached a settlement with Kaepernick and Reid.

'Not wanting to play'

Reid has since signed for the Carolina Panthers, and following the Panthers' loss to the Atlanta Falcons, continued to back Kaepernick.

It was Kaepernick's first public NFL appearance in three years. So following the workout, has anything actually changed in Kaepernick's struggle to get a contract?

Whilst there was positivity surrounding Kaepernick's workout -- one scout described his arm talent as "elite" to ESPN -- Reid accused the NFL of turning it into a "PR circus."

Stephen A. Smith, an ESPN pundit with over 4.5 million Twitter followers, accused Kaepernick of not "wanting to play."

"The whole goal of this was to show that Colin is ready to play this game," Reid said. "He took his workout to a different location and he showed that. He proved that.

"It was reported that his arm was 'elite.' It's always been that way."

Reid also accused Smith of "tap dancing to the NFL" and being "so blatantly on the NFL's side in corrupting their own process to hinder Colin's employment."

And although Kaepernick's first appearance perhaps should have been a moment for change, the lack of trust between the two sides suggest there is still a long way to go before we see Kaepernick in the NFL.