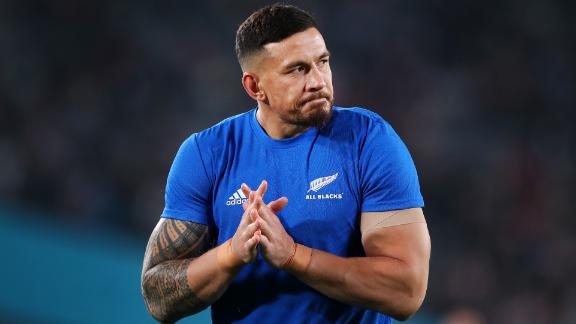 He's one of New Zealand's most famous sporting sons, but Sonny Bill Williams believes his move into rugby league in Canada could help "open doors" to a generation of young players.

He's one of New Zealand's most famous sporting sons, but Sonny Bill Williams believes his move into rugby league in Canada could help "open doors" to a generation of young players.

The All Blacks star is swapping rugby union for the 13-a-side variant to play for the Toronto Wolfpack on a two-year deal thought to be worth $10 million, making him rugby's highest-paid athlete.

The skilful center has pedigree in league having played for the Bulldogs in New Zealand and the Sydney Roosters in Australia, as well as representing the New Zealand national team.

But this latest endeavor is completely new, playing in a country with little to no history of the sport, for a team that has only recently been promoted to England's Super League.

"For myself, every purpose needs to have a bit of selflessness about it," Williams told CNN's Alex Thomas of his move.

"When you take into account North America and Canada, the sporting hub that is Toronto -- if rugby league can take off there, I see doors opening for youngsters from New Zealand, from the Polynesian community, from young English lads being able to have another pathway for success for themselves and their family.

"It's a very special and exciting time."

A two-time Rugby World Cup winner, Williams is one of the world's most successful cross-code athletes. On top of his prolific careers in rugby union, league, and sevens, he has also dabbled in boxing, winning all seven of his heavyweight fights.

He played the last of his 58 Tests for the All Blacks in the bronze-medal victory over Wales at the World Cup last month. He ended his career with a tally of 13 tries for his country.

READ: Why not everyone in South Africa is celebrating Rugby World Cup success

Williams was dubbed the "LeBron James of rugby" by Toronto chairman Robert Hunter, who also compared the signing to David Beckham's move to LA Galaxy. But Williams said he's ready to embrace the burden of expectation, something that his Muslim faith has helped him to manage.

"I never like to make those kinds of comparisons. For myself, I'm just content with the man (I see) when I look in the mirror," he explained. "I'm a man of faith and I heavily rely on that.

"But at the same time, I understand I've been around this game, professional sports in a high-pressure environment for over 10 years now and I understand that that comes with it.

"If I have to put myself out there a bit more, my brand, put the Toronto brand about a bit more to get more eyeballs on what we're trying to achieve in Canada to get it kicked off even more and build on what they've already achieved, then why not?"

Williams admits he never foresaw himself living and playing in North America, but couldn't turn down the prospect of a new challenge.

"We all love the NFL and basketball and the NBA (in New Zealand)," he said. "I was pretty content doing what I was doing.

"I've played rugby, I've played league, I've boxed, so I'd like to think that I'm a sportsman. But the challenge of that -- yeah, you have to be vulnerable and put yourself out there -- but as a sportsman, what better chance or what better opportunity to test yourself than this one?"