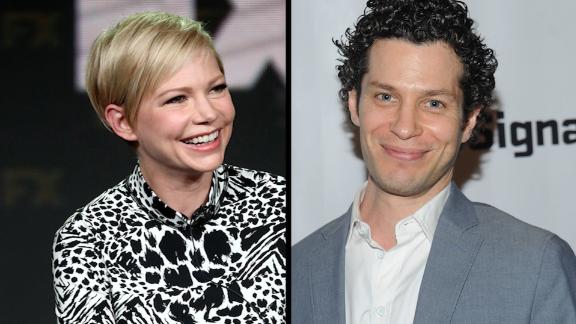 Actress Michelle Williams is engaged and expecting with director Thomas Kail. The couple met during the production of the dance drama "Fosse/Verdon."

Michelle Williams is engaged to "Hamilton" director Thomas Kail, and the two are expecting a baby, a source close to the actress confirms to CNN.

The four-time Oscar nominee and the Tony Award-winning director worked together on the dance drama "Fosse/Verdon," for which Williams won the Emmy Award for lead actress. Kail directed the show.

He also directed Lin-Manuel Miranda's Broadway show "In the Heights" and won an Emmy for directing "Grease: Live."

The New York Theater circle was delighted to hear the news, with stage insiders taking to social media to congratulate the couple.

"So, yes, the news is out: actress Michelle Williams and director Tommy Kail are having a child together and engaged to be married. I hope this means she's be doing more theater, rather than he'll be doing less," one wrote.

The "Dawson's Creek" actress shocked fans in July 2018 when she told Vanity Fair that she had secretly tied the knot in the Adirondacks with musician Phil Elverum. Williams described her relationship with Elverum to Vanity Fair as "very sacred and very special." The two divorced less than a year later.

Williams is the mother of 14-year-old daughter Matilda, whom she shared with the late Heath Ledger. The two were in a three-year relationship and had their daughter before Ledger died from an accidental overdose of prescription medication in 2008.