'Jeopardy! The Greatest of All Time' aims to crown a champ of the champs 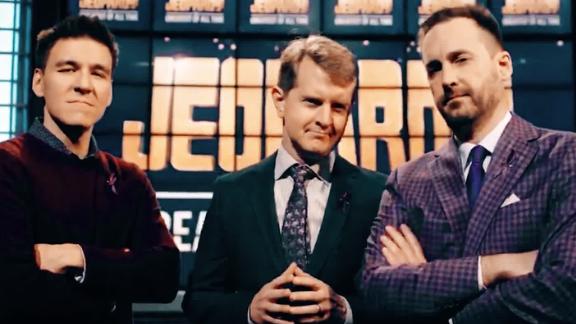 The three top winners in "Jeopardy!" history, Ken Jennings, Brad Rutter and James Holzhauer, continue to compete against each other during a prime-time event on ABC.

The three top winners in "Jeopardy!" history are set to compete against each other during a prime-time event starting Tuesday night on ABC.

"Jeopardy" alums Ken Jennings, Brad Rutter and James Holzhauer will vie for the title as top champ of the champs on the popular game show.

The three men will compete in a series of matches. The first competitor to win three matches will receive $1 million and the title of "Jeopardy! The Greatest of All Time."

Jennings, holder of the longest winning streak in "Jeopardy!" history, tweeted a photo of the three Monday morning.

"Based on their previous performances, these three are already the 'greatest,' but you can't help wondering: Who is the best of the best?" Trebek said in a statement. A tweet from the Jeopardy! Twitter account promised the special will be "the most epic showdown ever!"

Jennings became a household name during his record 74-game winning streak, with winnings that totaled $3,370,700.

Rutter holds the title for the most money won by a contestant -- across any television game show -- raking in $4,688,436 in "Jeopardy!" prize money. He has never lost "Jeopardy!" to a human opponent.

Holzhauer is the record holder for all 15 of the top single-game winnings records on the show. He won the 2019 Tournament of Champions and his winnings total $2,712,216.

The special is produced by Sony Pictures Television with Harry Friedman serving as executive producer.