Lev Parnas has taken the impeachment stakes even higher 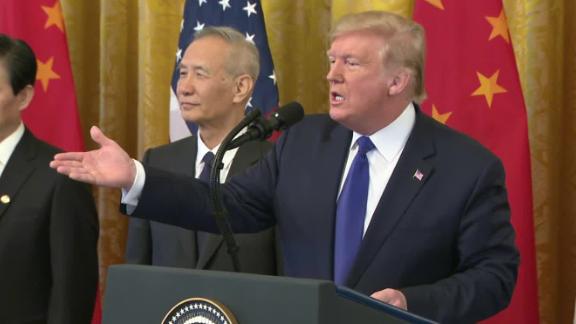 President Donald Trump called impeachment a "hoax" during a signing ceremony of a trade agreement with China as the House prepares to vote on sending the articles of impeachment to the Senate.

President Donald Trump "knew exactly what was going," asserted Lev Parnas, describing a plot that he said was "all about 2020": helping Trump win re-election, not fighting corruption in Ukraine. That is just some of what Parnas, an associate of Trump lawyer Rudy Giuliani, said in a couple of television interviews Wednesday night, one with CNN's Anderson Cooper, another with MSNBC's Rachel Maddow.

Parnas, who is under indictment for alleged campaign finance-related crimes, sent shrapnel flying across Washington just as the impeachment trial of the President is set to get underway.

And despite denials from the many powerful people implicated in his allegations, and notwithstanding warnings by a top Ukrainian official to CNN's Christiane Amanpour that Parnas is not credible, some of the claims made by the Soviet-born US citizen, who played a key role in Trump's Ukraine strategy, are backed by physical evidence. These are in the form of documents and text messages that have been released to the House of Representatives.

Parnas said Trump "is lying," when he claims he withheld aid to Ukraine in order to fight corruption. Parnas said Vice President Mike Pence was in the loop, and described Attorney General William Barr as being, "a member of the team," that was working to secure an announcement from Ukrainian President Volodymyr Zelensky that would smear Joe Biden, Trump's leading 2020 rival.

All those now implicated by Parnas, including Pence and Barr, adamantly deny the accusations.

The contrast between all of this and the events underway in Washington DC this week could not be more jarring. On one side, House Speaker Nancy Pelosi on Wednesday launched the solemn process that will trigger the trial of President Donald Trump in the Senate, naming the managers who will lay out the case against him, just ahead of the House vote to formally approve the ceremonial delivery of the articles of impeachment.

On the other side, solemnity and decorum could not have been more distant.

Despite Trump's determined effort to block the release of any of the documents requested by investigators, Americans were slapped with a new batch of material showing Trump's lawyer Rudy Giuliani, Lev Parnas and another Trump supporter at work on the Ukraine scheme, evidence of a ploy more worthy of a mob family than one conducted for the benefit of the leader of a decent nation.

Pelosi, as she has done, sought to frame the matter as something higher than politics, about defending American democracy from those bent on undermining it. "This is about the Constitution of the United States," she said, pointedly adding, "It's important for the President to know, and for Putin to know, that the American voter should decide who our president is."

The choice of House managers underscores the Democrats' effort to press Senate Republicans to treat this is a real trial, as mandated by the Constitution. The group includes six attorneys and one former police chief; all are people familiar with court proceedings and criminal activities.

As if to highlight the appropriateness of the selection, the newly released documents further incriminate the operation that will go on trial.

This material was only made available because Parnas turned it over to the House. If you read it, you may feel like taking a shower to clean off the stench from the profanity and misconduct on display. It's no wonder Trump is doing everything in his power to prevent other documents from becoming public.

As with other bombshells made public since the December 18 impeachment, this one offers overwhelming evidence of malfeasance. But unlike other recent revelations, this looks like a snapshot of the underworld, filled with profanity, intimidation and possibly worse.

The conduct of Trump and his team is reminiscent of the Sopranos. But unlike Tony Soprano and his mobsters, this gang works on the global stage; their actions affect not only the standing of the United States but the country's security.

Nadler, along with the head of the team, Rep. Adam Schiff, accused Trump of trying to cheat to win the 2020 election. The new evidence backs their contention.

The documents include text messages, hand-scribbled notes and snapshots of letters by and among the Giuliani-led team that sought to pressure Ukraine's President Volodymyr Zelensky to announce he was investigating Joe Biden and his son; a patent effort to enlist Ukraine's help to defeat him.

As we learned a few days ago, only moments after Trump brought up the Biden matter in a call with Zelensky, he ordered a freeze of congressionally approved military aid to Ukraine, something his own administration's officials worried was illegal, sparking a frenzy of anxious correspondence.

Trump has denied any wrongdoing associated with the withholding of aid.

The evidence confirms this was an operation in which Trump was deeply involved. In a snapshot of a letter where Giuliani asks Zelensky for a meeting, he states that he's working "with the President's knowledge and consent."

Then there's another detail that destroys the President's defense. He has claimed that the entire Ukraine/Biden operation aimed to combat corruption. The fact that Trump has never cared about corruption anywhere but in Ukraine may not be enough proof for some.

But the release confirms what witnesses in the impeachment hearings said: Giuliani and his associates, working to pursue Trump's Ukraine policy, were demanding an announcement of an investigation. There's no evidence that what they wanted was an actual investigation.

One of the most intriguing and damning pieces are paper scraps handwritten by Parnas, according to his attorney. "Get Zalensky (sic) to announce that Biden case will be investigated" it starts, moving on to other parts of the plan; also, "Victoria/Joe retained; 100,000 -month." "Begin media campaign."

In his interviews, Parnas said that referred to Joe DiGenova and Victoria Toensing -- two lawyers who are frequent Fox News commentators and fierce Trump defenders -- and their alleged legal relationship with Yuri Lutsenko, then-prosecutor general of Ukraine (Last year. a spokesman for Toensing told the Washington Post of their relationship that "no money was ever received and no legal work was ever performed.")

An obvious question now is whether they were getting paid to propagate the concocted conspiracy theory about Biden, and using Fox for the purpose.

Whether or not they did get paid, it's worth remembering that Parnas received generous payments from a Ukrainian billionaire with ties to Putin, who made his fortune thanks to the Russian president.

But perhaps the most disturbing elements concern actions regarding former Ambassador Marie Yovanovich, who was America's top diplomat in Ukraine at the time. In text communications one person, Robert F. Hyde —a Trump acolyte and a candidate for Congress in Connecticut-- calls her a "bitch," while apparently tracking her movements. Hyde's texts indicate that she was under surveillance by people working to advance Trump's Ukraine strategy. At one point, the talk takes an ominous turn, sounding as if someone is offering to "get rid" of Yovanovich.

The US State Department and Secretary of State Mike Pompeo have done nothing publicly to look into the matter, but Ukraine has launched an investigation.

Hyde texts Parnas about Yovanovich: "They will let me know when she's on the move...They are willing to help if you/we would like a price." Then he says, "Guess you can do anything in Ukraine with money..." When asked by CNN on Tuesday if he offered to harm Yovanovitch, Hyde replied, "No effing way."

Yovanovich was ordered to leave Ukraine immediately shortly after that. In Trump's call with Zelensky, he told him, "She's going to go through some things." It's unclear what he meant by that.

As the Senate trial prepares to start, Americans of all parties should ponder, is this what they want from their president? Pressuring a foreign leader to investigate a political rival; having US diplomats tracked and intimidated? Allowing oligarchs with ties to the Kremlin to fund operations aimed at boosting his reelection chances?

It all fits with the rest of Trump's behavior, his payment of hush money to cover up alleged sexual encounters, his mob lingo to insult former friends -- remember when he called Michael Cohen a "rat" -- his browbeating and intimidation of aides?

There are two Americas in the US government. One decent, bound by the laws. One corrupt, beholden to Trump. We saw both in action in a matter of hours on Wednesday.

Nadler was right when he said, "The Senate is on trial as well as the President."

This commentary has been updated to include news of Lev Parnas' interviews.

Hi: 82° Lo: 64°
Feels Like: 67°
More Weather
Temperatures today will remain slightly above average with highs in the mid 80s. Most of today will be dry and sunny, but a weak cold front will move through late this afternoon into this evening giving us the chance for a few isolated showers and storms. Conditions will stay comfortable this weekend with highs in the mid 80s on Saturday and upper 80s on Sunday. Temperatures will start off above average on Monday before a cold front moves through. That front will give us additional rain chances Monday night and some much more fall like temperatures through the rest of the week.

One injured in motorcycle accident