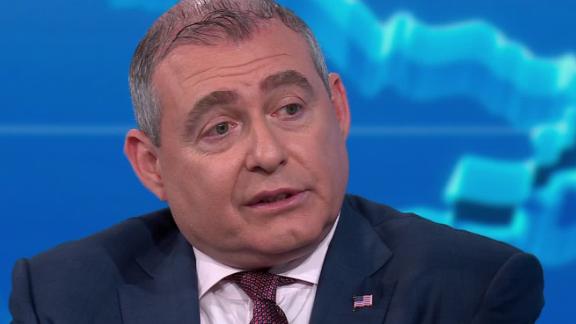 Lev Parnas, an associate of Rudy Giuliani, told CNN he witnessed President Donald Trump telling a top aide that the US ambassador to Ukraine should be fired.

It was one of several instances when Trump attempted to fire then-Ambassador Marie Yovanovitch, Parnas told CNN's Anderson Cooper in the latest installment of a wide-ranging interview that aired Thursday night. Parnas, a Soviet-born businessman, has become a central figure in the campaign to pressure Ukrainian officials to investigate Trump's political rivals.

The scene unfolded during a private dinner in spring 2018 at Trump's hotel in Washington, where top donors to a pro-Trump super PAC -- including Parnas -- mingled with the President.

"In the conversation, the subject of Ukraine was brought up," Parnas said. "And I told the President that our opinion that (Ambassador Yovanovitch) is badmouthing him -- and that she said that he's gonna get impeached -- something like that. I don't know if that's word for word."

Parnas continued, "and his reaction was, he looked at me, like, got very angry, and basically turned around to (then-White House aide) John DeStefano, and said, 'Fire her. Get rid of her.'"

At the time, DeStefano was a senior adviser to Trump. The conversation that Parnas described apparently occurred one year before Yovanovitch was ousted from her post. She testified in the House impeachment inquiry that the State Department informed her in late April 2019 that she was being removed from Kiev because Trump "no longer wished me to serve as his ambassador." The exchange is consistent with previous court filings that said Parnas was promoting damaging allegations about Yovanovitch months before the Trump-backed pressure campaign began in Ukraine.

It's clear the exchange was not the actual moment that Trump fired Yovanovitch. Some impeachment witnesses testified that Trump needed Yovanovitch out of the way because she was an obstacle to his efforts to pressure the Ukrainians and secure the Biden investigations.

The Parnas interview shows how he was able to draw close to the President, and was sometimes in the room while Ukraine was being discussed. When Trump was asked earlier on Thursday about his relationship with Parnas, he said, "I don't know him at all, don't know what he's about, don't know where he comes from, know nothing about him."

The anecdote was one of several stunning new revelations from Parnas, who has been on a press tour since he provided hundreds of documents to House investigators earlier this week.

Democrats have said that the new information is further proof that Trump should be removed from office. Republicans have questioned Parnas' credibility and pointed to the fact that he's been charged with making illegal campaign contributions, including those to the Trump super PAC, and might be looking for a cooperation deal from prosecutors. He has pleaded not guilty to the federal charges.

New details of the pressure campaign

In the CNN interview, Parnas explained how he coordinated directly with Giuliani, who is Trump's personal attorney, and tried to pressure any Ukrainian officials who were willing to take a meeting.

Parnas said they established a "protocol" to prove to the officials that he had political power.

Parnas said that the first adviser in Ukrainian President Volodymyr Zelensky's orbit that he met with last year was Ivan Bakanov, who is now one of the senior-most intelligence officials in Ukraine. Parnas said the first thing he did after sitting down with Bakanov was take out his phone and call Giuliani.

"I put him on speakerphone, and Rudy ... told him that I represent the President of the United States, and that everything I say (is) to be taken with that authority," Parnas told CNN.

Bakanov was just one of several officials close to Zelensky that met with Parnas, Giuliani and other Trump representatives. They delivered the message that Zelensky needed to announce an investigation into former Vice President Joe Biden, a leading 2020 rival, according to Parnas' comments to CNN and testimony from multiple witnesses in the House impeachment inquiry.

One of the impeachment articles against Trump accuses the President of abusing his powers by using his position as president to boost his reelection chances, and that he did it by directly pressuring Zelensky and by ordering emissaries like Giuliani to also apply pressure to Ukrainian officials.

For his part, Zelensky has publicly denied feeling any pressure to investigate Biden. Trump has repeatedly touted these comments from Zelensky and said they prove he did nothing wrong.

"That's a total lie," Parnas said, referring to Zelensky's recent denials. "They're still, I mean, they're still rocked 'til this day. They're still not recovered and I don't know if (or) when they will."

One reason Zelensky can't admit any pressure, Parnas said, is because Ukraine is still dependent on US assistance. A key part of Trump's alleged quid pro quo was the holdup of nearly $400 million in security and military aid to help Ukraine in its war against Russian proxies.

"I'm not here to try to call them out and put them, maybe, in a worse position," Parnas said. "If Zelensky says whatever he actually feels ... he still needs aid from the Trump administration."

Parnas: Republicans are 'afraid of me'

A key question hovering over the impeachment trial -- which formally began Thursday with the swearing-in of Chief Justice John Roberts and 99 senators (one was away from Washington and will be sworn in separately) -- is whether any additional witnesses will be called to testify. Parnas said he is "very willing to testify," if he is asked.

But Parnas said he's not sure he'll be called to testify because it would hurt Trump's defense. Under the trial rules, a majority of senators are needed to subpoena new witnesses. Democrats only control 47 seats, so they'd need four Republicans to reach the critical 51-vote threshold.

"I should be their best witness," Parnas said. "I should be their No. 1 witness because I'm the one that got all the dirt supposedly. Why aren't they calling me to testify? Why do they need Biden? Call me. Ask me what Biden did wrong ... I think they're very afraid of me."

Asked if he had a message for Trump, Parnas blasted the man he said he once "idolized."

CORRECTION: This story has been updated to correctly state the date of the dinner Parnas attended with Trump.

Hi: 78° Lo: 69°
Feels Like: 70°
More Weather
A cold front moved through last night, giving us thunderstorms but left us with a significant cool down from the heat we've had the past couple of weeks. Today we saw a few light showers and temperatures in the low 80s for our high. Tonight should be cool as well with lows in the lower 60s and calm winds. Dry and sunny conditions continue into next week as temperatures stay seasonal. Highs look to stay in the 80s until midweek and the humidity will be moderate, feeling a lot more comfortable than last week. Scattered showers and storms will continue off and on mainly through the morning and afternoon hours on Saturday. Temperatures will be much cooler on Saturday with highs in the mid 80s. Dry and sunny conditions will take over on Sunday and continue into next week as temperatures stay seasonal.

Mother charged in connection to death of Gower baby boy, abuse of another