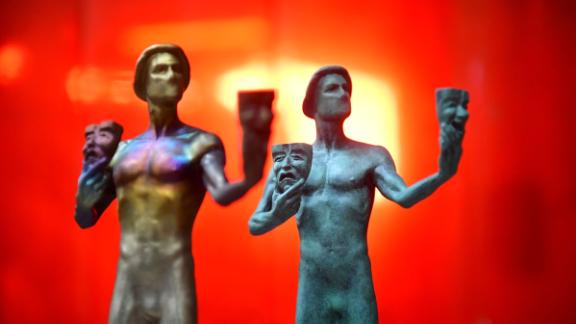 CNN's Stephanie Elam shares what to expect at the 2020 Screen Actors Guild Awards from the red carpet outside of the Shrine Auditorium.

The individual acting categories in the closely watched movie competition largely followed the script initially at the 26th Screen Actors Guild Awards, with Laura Dern and Brad Pitt claiming supporting awards for "Marriage Story" and "Once Upon a Time... in Hollywood."

After a number of politically oriented speeches at the Golden Globes earlier this month, the first hour of the ceremony proved virtually devoid of politics. That changed, briefly, when Robert De Niro accepted SAG's life achievement award, giving a full-throated defense of actors wading into that arena, saying, "As a citizen, I have as much right as anybody ... to voice my opinion."

The tone much of the night, however, was more personal than political. Dern, for example, thanked her parents, actors Bruce Dern and Diane Ladd. (Jennifer Lopez -- overlooked by the Oscars for her role in "Hustlers" -- was among those she overcame.)

On the TV side, Amazon comedies swept their way through the early prizes, including the second consecutive best ensemble win for "The Marvelous Mrs. Maisel" and actor Tony Shalhoub, and Phoebe Waller-Bridge for the Emmy-winning "Fleabag."

The "Maisel" cast -- which expressed shock over the win, saying they expected "Fleabag" to be called -- dedicated the award to co-star Brian Tarantina, who played Jackie on the show. The actor died of an accidental drug overdose in December.

Pitt offered a humorous acceptance speech, opening by saying, "I've got to add this to my Tinder profile." He proceeded to joke that the role -- a guy who takes off his shirt with a spotty marital track record -- really wasn't much of a reach for him.

As if on cue, Pitt's ex-wife, Jennifer Aniston, later received the first SAG award for fledgling Apple TV+ for the backstage drama "The Morning Show."

Peter Dinklage, meanwhile, won for the first time -- after six nominations -- for HBO's "Game of Thrones."

The cast of "Parasite" -- the South Korean thriller, also nominated for best picture -- received an enthusiastic ovation when they presented the film.

Although SAG is the only televised awards of the four guilds representing actors, writers, directors and producers, it's not the most reliable barometer in terms of predicting the Academy Awards.

On Saturday, the Producers Guild of America honored "1917," following its win at the Golden Globes. The format of the World War I film, notably, doesn't really fit the "ensemble" category that SAG employs, and it wasn't one of this year's nominees.

Among the guilds, the producers have been the strongest Oscars bellwether, with its best-picture winner lining up the eventual Oscar choice eight of the last 10 years, including "Green Book" in 2019. SAG chose "Black Panther" for the ensemble award last year.

During that span, the Directors Guild has coincided with the Oscar winner six times, and SAG and the Writers Guild four each. The DGA and WGA will weigh in on Jan. 25 and Feb. 1, respectively.

The film and TV awards for stunt ensemble -- presented prior to air -- went to "Avengers: Endgame" and "Game of Thrones."