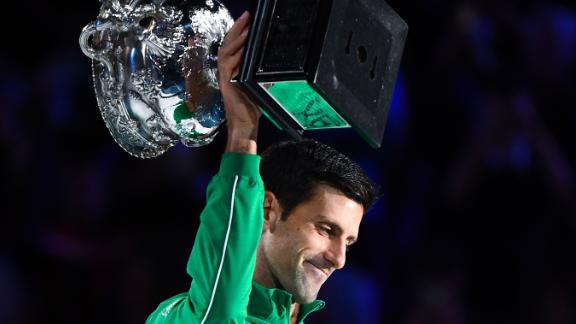 In the world of men's tennis, who will reign supreme? Is it the Big 3 of Nadal, Djokovic and Federer? Or the young guns: Medvedev, Tsitsipas and Thiem?

The declaration of a public health emergency for the Coachella Valley in California due to the coronavirus outbreak has prompted the cancellation of the BNP Paribas Open international tennis tournament in Indian Wells.

After a case of COVID-19 was confirmed in the valley -- the desert east of Los Angeles -- the organizers made the decision to cancel the tournament, a statement announced.

"There is too great a risk, at this time, to the public health of the Riverside County area in holding a large gathering of this size," said Dr. David Agus, Professor of Medicine and Biomedical Engineering at the University of Southern California, on Sunday.

"It is not in the public interest of fans, players and neighboring areas for this tournament to proceed. We all have to join together to protect the community from the coronavirus outbreak."

The decision to cancel the event came after consultation with the Centers for Disease Control (CDC) and the State of California.

Outside of the four grand slams, Indian Wells is of one of the tennis season's most prestigious events.

Dubbed the "fifth grand slam," the tournament -- which is located 130 miles to the east of Los Angeles -- draws some of the largest crowds for a tennis event in North America. The tournament offers equal prize money for men and women, with a total prize pot of just over $17 million ($8,542,680 per Tour).

Many of the world's leading players, including men's world No.2 Rafael Nadal, had already arrived in California for the event where qualifying was set to start on Monday, with main draw matches scheduled for Wednesday.

"We are very disappointed that the tournament will not take place, but the health and safety of the local community, fans, players, volunteers, sponsors, employees, vendors, and everyone involved with the event is of paramount importance," said ournament director Tommy Haas. "We are prepared to hold it on another date and will explore options."

Any ticket holder can request a refund or credit for the 2021 tournament.

Steve Simon, Women's Tennis Association (WTA) chairman and CEO, stressed the focus is firmly on "protecting the health of our players, staff, volunteers and fans who attend our events."

"The WTA empathizes with those affected by the coronavirus in this region and around the world," he said in a statement.

"We are disappointed our fans will not be able to come out and watch the event, and our players are also disappointed to not compete over the next two weeks, along with the sponsors who support the event. However, we understand the decision which has been made in the interest of public health and safety which is the top priority at this time.

"It is too soon to speculate about what will happen to other tournaments that follow. We will continue to closely monitor the situation. Health and safety will always come first."

READ: Chaos and confusion as Italian sports minister calls for Serie A suspension amid coronavirus outbreak

On Friday, competition organizers had announced preventive measures to help stop the spread of the novel coronavirus in the expectation Indian Wells would go ahead.

Ball boys and girls were set to wear gloves on court, as well as restaurant, food supply workers, and volunteers at entrances.

Although typically it is a ball kid's job to look after players' towels, they would have not been required to touch towels. Players would have managed their own towels on court, placing their towels on a chair at the back of the court during play.

More than 250 hand-sanitizing stations had been installed around the complex, and fan and player interaction was expected to be limited.

A combined men's and women's tournament is scheduled for Miami later this month, but there was has been no word on any changes to that event.

Following Miami, the men's and women's tours head to Europe for the beginning of the clay court season which includes, among others, an ATP and WTA event in Rome, Italy, the status of which is still to be determined.

The novel coronavirus has infected more than 108,000 globally and killed more than 3,800, according to CNN's tally.