Will any senators actually flip on Trump impeachment? 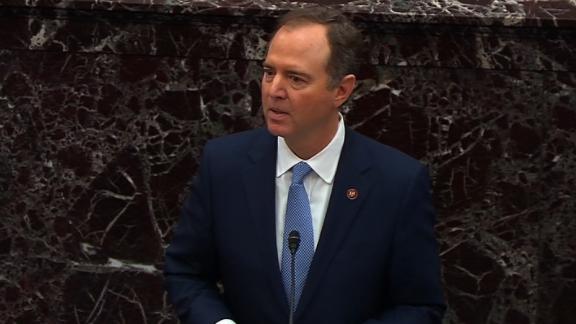 President Donald Trump was impeached in December by the Democratic-controlled House of Representatives, but now it's up to the Republican-led Senate to decide whether to remove him from office.

Under the rules, it takes two-thirds of the Senate -- 67 votes -- to remove an impeached President. That means 20 Republicans would have to turn on Trump, an idea that seems fanciful, since no Republicans have suggested the abuse of power that led to his impeachment should cost him the White House.

However, that doesn't mean GOP senators are not under pressure. In particular, they are facing a choice on the issue of whether witnesses should be called during the trial. Democrats need four Republicans to vote in favor of subpoenas for witnesses or new evidence in order to extend the trial and gather new information. Getting that many will be difficult.

Realistically, there are only perhaps four who would vote in favor of calling witnesses who could testify against the President. That short list includes relative moderates Sens. Susan Collins of Maine and Lisa Murkowski of Alaska, Trump-frustrated conservatives like Sen. Mitt Romney of Utah and endangered senators up for reelection like Sen. Cory Gardner of Colorado.

But there are Democrats who could, feasibly, break with their party — giving Republicans a bigger cushion to work with. And even if Democrats can get four GOP votes to approve witnesses broadly, there will be a separate fight over which specific witnesses get called and it could be that they never get enough votes to compel anyone to testify in the end.

Plus, Trump is likely to try to exert executive privilege over witnesses, prompting some Republicans to suggest they don't even want to bother trying. It's a pragmatic approach, maybe, but one which doesn't do much for the constitutional idea of separation of powers.

Here's a larger list of senators to watch and why they're facing pressure to break with their party.

A conservative who has criticized Trump

Conservatives once viewed Trump skeptically. Now the GOP is united behind him. That doesn't mean there isn't frustration with his behavior.

Why he's important: Romney is a conservative Republican but he's no friend of Trump and has flashed his independence at times. Romney tried to sabotage Trump's campaign in 2016 and then Trump embarrassed him by pretending to consider Romney as his secretary of state. But Romney has also complained about how Democrats went about impeachment.

Quote: "I've already indicated that I'm interested to hear from John Bolton, perhaps among others," he said.

Will he flip? He's keeping everyone guessing

Senators in tough reelection fights are either appealing to the middle in their state, or to the base.

Why she's important: Collins is the only Republican to side with Democrats, albeit in a single vote on a minor point, on a portion of rules for the trial. If there's one Republican likely to vote for witnesses, it's Collins. She's in a tough reelection battle in a state that supported Trump. She likes to portray herself as a moderate. She has broken with Trump at key moments (Obamacare) and helped him in others (voting to confirm Supreme Court Justice Brett Kavanaugh).

Quote: "I've worked very hard to make sure we vote on witnesses and documents at the appropriate stage of the trial. ... I tend to like information and would anticipate I would vote for more," she said this week.

Will she flip? It's a good bet she'll vote with Democrats on something. But probably not on everything.

Why he's important: Perhaps the most endangered Republican senator, Gardner will have trouble keeping his seat against former Gov. John Hickenlooper, his likely Democratic rival. His desk, which is usually situation towards the back of the chamber, is situated prominently in the front row on the Republican side of the aisle during the impeachment trial and he's listened intently and taken lots of notes.

Will he flip? Doubtful. Gardner has not played to moderates like Collins. He's trying to win in Coloroado with a focus on the GOP base.

Why she's important: McSally lost a race for Senate in 2018 to Sen. Kyrsten Sinema, but she was appointed to fill out the term of Sen. John McCain. Now she's running for election to that seat in 2020. She faces a tough fight against former astronaut Mark Kelly. The fact that she bragged to her supporters about calling CNN's Manu Raju a hack suggests she's focused on the Trump base in her state.

Quote: "Manu, you're a liberal hack. I'm not talking to you," she said when Raju asked her if she was open to witnesses. Watch that moment here.

Will she flip? Clearly not

Why he's important: Barack Obama won North Carolina in 2008 and Democrats have been trying to reclaim it ever since with no luck. It's a key state again in 2020.

Quote: "It's time to get back to work on issues that are important to North Carolinians," he said.

Will he flip? Nope.

Why she's important: Ernst is a stretch. Iowa is less and less a swing state and she's pretty reliably in Trump's corner on political issues. Her statements have been very dismissive of impeachment and the need for more information.

Quote: "In the House's own brief, they state numerous times that they have overwhelming evidence and if that's the case there shouldn't be any reason to bring forth any more documents or witnesses purely for political purposes," she told a TV station in Iowa.

Will she flip? Doesn't seem likely.

Why he's important: Jones was lucky to win a special election in 2017 to take the Senate seat left vacant when Jeff Sessions left to become Trump's first attorney general. Now Jones could face Sessions, who is running for his old seat, in 2020. If there's a pickup opportunity for Republicans, this is it. While Jones has broken with Democrats on some key issues, he's all in on impeachment.

Will he flip? Nope. He's committed to witnesses.

Moderates not up for reelection

There are still some fans of bipartisanship in Washington. But impeachment is a very partisan affair.

Why she's important: Murkowski is often lumped in with Collins as a moderate, but that's a relative term in today's Washington. She's part of a political dynasty in Alaska that exists independent of the GOP. In 2010 she lost a primary race there only to win a a write-in campaign, which is the politics equivalent of a triple Lindy.

Will she flip? We shall see. Her frustrations with the impeachment process are already clear.

Why she's important: Sinema won as a Democrat in Arizona, a state Democrats have been trying to claim. She did it by evolving from an anti-war protester to a full-fledged moderate. But she's already on the record wanting witnesses at the trial.

Will she flip? Not on this.

Why he's important: Portman is a fan of bipartisanship and he's projected that he has an open mind. But he rarely votes with Democrats.

Quote: "There will be an opportunity for us to seek new information or new witnesses," he told the Associated Press recently.

Will he flip? He's been careful to respect the process.

Why he's important: Manchin is a political survivor, a Democrat in what's become a very red state.

Quote: "I think it's important to have all the facts in front of me, which includes witnesses and documents," he told constituents on Twitter.

Will he flip? He's staying with his party.

Longtime lawmakers who aren't facing voters again. Will they surprise Washington on their way out the door?

Why he's important: An institutionalist and a big fan of bipartisanship, Alexander may not like Trump's behavior, but while he's often been a voice of reason, he rarely breaks with the party on actual votes. He's also a close ally of Majority Leader Mitch McConnell who will be relying on him not to buck the party.

Quote: "We are going to listen to the answers to our questions, study the record and see if we need more evidence at the point. I'll make my decision after I hear all of that," he told CNN's Manu Raju.

Will he flip? Maybe. Maybe not.

Why he's important: He's a retiring Republican, so who knows what he'll do.

Will he flip? Enzi isn't on anyone's short list to buck the party.

Why he's important: Another retiring Republican, he is not facing voters again.

Will he flip? Roberts isn't on anyone's short list to buck the party.

Any senator in the Rust Belt, which Trump won, narrowly, in 2016, has to be cognizant of the political battles in their states.

Why he's important: It's more that Pennsylvania is important and Toomey hasn't closed the door to witnesses.

Quote: "We will allow House managers to make their case, the President's lawyers to make their defense, and senators to pose questions. At the conclusion of these presentations, the Senate can then decide what, if any, further steps are necessary."

Will he flip? He hasn't said no to witnesses. But he's also been dismissive of impeachment.

Why he's important: He's up for reelection in a key state.

Quote: "I just know, and I believe most Americans would agree with me, that if I were on trial and I have witnesses that can corroborate that and that can testify to the fact that I am innocent, I would want them on the stand," he told a Michigan outlet as the trial got underway.

Will he flip? Nope.

Race ratings listed according to Inside Elections.