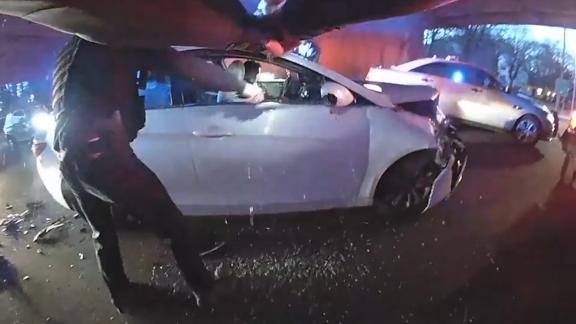 A Connecticut state police trooper fatally shot 19-year-old Mubarak Soulemane after a high speed chase over a carjacking. No charges have been filed against the state trooper who shot him.

The family of a Connecticut man fatally shot by a state trooper is calling for the officer to be fired and criminally prosecuted.

Mubarak Soulemane, 19, was shot and killed January 15 after a reported carjacking and high-speed chase that ended near Interstate 95 in West Haven, according to the Connecticut State Police.

Family and friends of the young man, who say he'd been diagnosed with schizophrenia, held a protest this week following the state police's release of video of the shooting from the body cameras and the in-car cameras of officers involved in the incident.

Police said a white Hyundai was carjacked in Norwalk by Soulemane armed with a knife. He led police on a high-speed chase on I-95 into New Haven, police said. He struck two cruisers and a civilian vehicle before he was boxed in by troopers shortly after exiting the interstate, according to police.

Police camera footage shows a trooper breaking the passenger side window while other officers shout at the driver to exit the car. An attempt to use a stun gun on Soulemane proved "ineffective," police said in a statement.

"When the driver displayed a weapon (later determined to be a knife), a Trooper on scene discharged his assigned duty pistol, striking the driver," the statement said.

The trooper, identified as Brian North, fired about seven shots through the window at Soulemane in the driver's seat, according to the footage.

North, a state police veteran of 4½ years, has been placed on administrative assignment pending an investigation, the statement said. He was the only officer who fired his weapon.

It's unclear whether North, who has not been charged with a crime, has an attorney. He did not respond to calls seeking comment.

Soulemane's mother, Omo Klusum Mohammed, told CNN Friday that her son was diagnosed with schizophrenia four years ago. She believes he stopped taking his medication while she was away in Ghana, she said.

"They should have used a proper procedure to stop him," Mohammed said. "They're telling him to get out of the car, but the car is blocked, how can he get out? The cop shot him seven times, as if he was an animal. This is murder. They murdered my son."

The Middlesex State's Attorney's office and the state Division of Criminal Justice are investigating the incident.

When asked about state police reports that her son was armed with a knife, Mohammed said she has to see it to believe it.

"They have to prove it to us if they say he had a knife," said Mohammed. "Still if he had a knife and he was in the car, then he is not a risk."

Soulemane's family was joined by friends and clergy members during a protest Tuesday. The family met with the head of the state Department of Emergency Services and Public Protection, according to CNN affiliate WFSB.

"Our Mubarak was someone who could light up the room with his genuine smile and open heart," Soulemane's sister, Mariyann, said in a statement, according to WFSB.

"His light was craved by many because he was a respectable, thoughtful and kind human being. Mubarak was the kind of person who would provide shelter for a friend because they had no other place to stay."

His mother said the family wants the trooper who killed her son to be fired and prosecuted for murder.

"I'm waiting for justice, justice for Mubarak," his mother said. "Whoever committed this crime has to go to jail."

She said a memorial service would be held Friday night at Notre Dame High School in West Haven, which her son attended. His funeral is Sunday.

Mohammed said she had been in Ghana for four months when one of her sons called her last week.

"He was screaming, yelling and crying. I told him, 'What is it?'" she said. "He said, 'The police shot Mubarak, mommy.'"