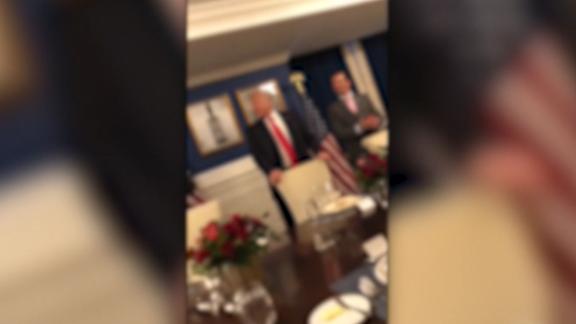 A nearly 90-minute recording released of President Donald Trump at a 2018 dinner with indicted businessmen he has claimed he doesn't know includes Trump speaking animatedly about removing the US ambassador to Ukraine.

A nearly 90-minute recording released Saturday of President Donald Trump at a 2018 donor dinner that included indicted businessmen he has claimed he doesn't know features Trump speaking animatedly about removing the US ambassador to Ukraine -- at one point stating, "Get rid of her!"

The tape was shared publicly by an attorney for Lev Parnas, the Soviet-born businessman who subsequently worked with Rudy Giuliani to push for ousting the ambassador, Marie Yovanovitch. She was ultimately removed from her post in April 2019.

CNN has listened to the entire audio but has not yet conclusively identified the individual speakers other than the President.

The recording, portions of which were disclosed Friday by ABC News, brings renewed focus to Trump's entanglement with Parnas, whom the President has denied knowing, and to Trump's desire to remove Yovanovitch, an effort central to the impeachment proceedings currently underway against him.

Parnas's attorney, Joseph Bondy, said in a tweet Saturday that he released the audio "given its importance to our national interest." He said Friday that he had shared it with the House Intelligence Committee.

Later Saturday, Bondy told CNN's Anderson Cooper that he believes the recording is significant because, "This is one of the first occasions in which (Trump) attempts to remove the ambassador."

"Parnas, as he has explained it to me, was shocked that he might raise the subject of the ambassador and have the chief executives say, 'Get rid of her and fire her,'" Bondy said. "You could never possibly have expected that the President would literally take that step."

He added that Parnas has more recordings of the President.

The recording was made by another Giuliani associate, Igor Fruman, and shared with Parnas shortly after the dinner, according to Bondy. Fruman's attorney declined to comment.

White House press secretary Stephanie Grisham on Sunday stood by the President's claim that he doesn't know Parnas, but defended Trump for listening to Parnas' claims about Yovanovich on the recording.

"The President sits at many, many dinners, at many, many tables, with people he does not know," she said during an interview with Fox News. "Now, if somebody comes to him and says, 'Hey, you know, somebody is doing something, they don't support you, et cetera, et cetera,' and you have to remember (Ukrainian) President (Volodymyr) Zelensky himself said there was a problem with this ambassador and she was not supporting the President's policies, so if the President is hearing that, he's going to then turn to somebody who is next to him and say, "Let's get her out of there." I think that's perfectly in line with anything he has the right to do and something he does constantly."

Grisham said later in the interview that Parnas was there with Giuliani.

"If somebody that the President trusts has somebody else with them and he's giving him information that he's already heard, and again from the president of another country, I think it's very reasonable that the President would listen to that whether he knows them or not, and give the directive that it's time for them to go," she said.

Only the first three minutes of the tape include visuals, and Trump can be seen briefly when he approaches the rectangular dining table set with red bouquets of flowers. The remaining portion of the recording is only audio.

The conversation involving Ukraine begins about 40 minutes into the 1-hour-and-24-minute recording.

During that discussion, Trump asks a person who appears to be Parnas how long Ukraine would "last in fight against Russia." Parnas says "without us, not very long," and another person chimes in, "about 30 minutes." Months later, Trump would try to cut off military aid to Ukraine.

The person who appears to be Parnas later says, "the biggest problem there I think, where you need to start, is we gotta get rid of the ambassador. She's still left over from the Clinton administration."

Trump responds, "the ambassador to Ukraine?"

Amid some laughter from the table, someone replies, "she'll be gone tomorrow."

Parnas and Fruman are under indictment in New York, where federal prosecutors in October charged them with campaign finance violations to which they've pleaded not guilty.

CNN reported Friday that federal prosecutors questioned Bondy in November about whether his client had been operating on behalf of Ukrainians at the dinner. Though Bondy rebutted that suggestion on behalf of his client, prosecutors have told him they don't believe Parnas.

Asked for comment Friday after the initial portions of the tape were made public, Grisham said, "Every President in our history has had the right to place people who support his agenda and his policies within his Administration."

This story has been updated with additional comment from White House press secretary Stephanie Grisham Sunday.

Hi: 55° Lo: 30°
Feels Like: 42°
More Weather
Tomorrow we will see lots of sunshine as a area of high pressure continues to move into northeast Kansas and northwest Missouri. The colder temperatures will start to move away from the area on Saturday. Then over the weekend we will warm up dramatically with highs in the 50s and watch for our next chance for rain on Sunday.