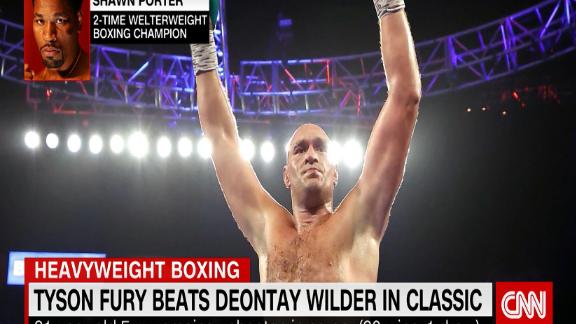 With a new coach by his side and extra power laced in his gloves, Tyson Fury delivered.

His ruthless, seventh-round stoppage against Deontay Wilder in Las Vegas is being talked about as one of the greatest performances in the history of heavyweight boxing.

No one has negated Wilder's vicious right fist as effectively as Fury did Saturday, while the Briton, weighing in 16 pounds heavier compared to when he and the US fighter played out a draw in 2018, also punched with a level of venom and ferocity he has never previously produced.

It has been reported that Wilder has 30 days to call for a rematch, and Fury said he is "almost sure" a third fight will take place.

WBA, IBF, WBO and IBO title holder Anthony Joshua is the opponent boxing fans want to see Fury take on next in what would arguably be the biggest fight British boxing has seen.

"No need for a third let's go straight to it in the summer," Joshua's promoter Eddie Hearn tweeted after the fight of a potential unification bout.

A third British heavyweight, Dillian Whyte, is Fury's mandatory challenger. Whyte, whose only defeat came against Joshua in 2015, was quick to remind Hearn of that on Twitter.

"Welldone to @Tyson_Fury cangrats (sic) let's hope we can get it on," said Whyte.

Whoever Fury's next opponent is, his undefeated status and the nature of his victory over Wilder make him the current man to beat in the heavyweight division.

He was in an ebullient mood ahead of the fight and was filmed dancing and grinning before entering the ring.

"I'm going to knock him out this time, where last time I boxed him," Fury told CNN on the eve of the bout.

"I'm going to punch him in the face multiple times until he falls to the floor in a heap and there he will lay and I will stand over the top of him, gazing down at him on the floor."

The scene played out almost exactly as Fury predicted.

In the seventh round, with blood streaming from his face, Wilder eventually succumbed to Fury's relentless assault.

Late last year, Fury split with trainer Ben Davison and partnered with Javan "SugarHill" Steward and his cousin Andy Lee at Detroit's Kronk Gym, where the Briton had previously trained as a fresh-faced 21-year-old.

The newly installed trainers spoke before the fight about helping Fury to focus on the basics -- balance, movement in the ring, and punching technique.

"Wilder has real power and that's a great thing. But that power's not so great when it's used against you. Sometimes you can wait for that big punch too long," Lee told The Guardian ahead of the fight.

"(Fury's) balance has improved. With improved balance comes greater power. By punching at the same time, and countering him before he lands, he can definitely knock Wilder out."

It was Fury's inability to effectively land a big shot on Wilder that cost him in the first fight, which ended in a controversial draw after the US fighter had twice floored the Briton.

Outside the ring, he has defended making homophobic and sexist comments in 2015, and more recently has won plaudits for speaking openly about his battle with depression and addiction that saw him contemplate driving his Ferrari off a bridge at high speed in 2016.

He told CNN last year that hoped to "help people, save one person's life" by speaking openly about managing his mental health, and said ahead of fighting Wilder that he would be "dead within a year" if he stopped going to the gym.

As far as his boxing is concerned, Fury is optimistic. The 31-year-old told reporters after his defeat of Wilder that his promoters would take care of the next fight should the American turn down another rematch.

"Even though it was a fantastic performance and I got a great win, I know I can do better," Fury said.

"I've only just started, me and SugarHill with this style.

"I'm a quick learner. We're going to be putting people to sleep left, right and center."