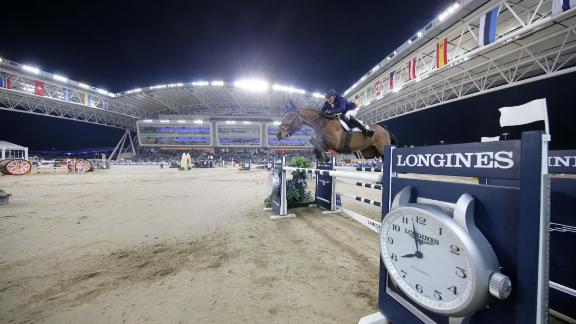 Daniel Deusser jumped a perfect and quick round to pip six other riders in the LGCT Doha Grand Prix ride-off to take the crown in Qatar.

The German pair were victorious in a seven-horse jump-off on a clear night at the sprawling Al Shaqab Equestrian Centre in Qatar.

"I'm still a little bit speechless, to be honest," said Deusser, who was the last rider to go.

Deusser paid tribute to his horse, a big-striding 10-year-old Belgian-bred bay mare named after one of Queen's most famous songs.

"She is quite young, and I think she shows everybody that she is one of the best horses in the world," he said.

Deusser, 38, comes from a horse-mad family. Although he has been riding since he was a child, horses weren't his only love. When he was in school, Deusser swam, played tennis and table tennis, and at one stage even made it to the BMX regional championships.

Doha, the first of 18 events across four continents, turned out to be a stern test for the world's top showjumpers. Highly experienced competitors such as Scott Brash of Britain and Edwina Tops-Alexander of Australia, both two-time overall LGCT champions, failed to reach the jump-off over a highly technical course set by German Frank Rothenberger.

"I thought it was a really tough course today," Deusser said. "It needed to be a tough course; we have the best riders and the best horses in the world here."

READ: Inside Al Shaqab, the 'Hollywood for horses'

The fifth combination, Belgium's Jerome Guery and Quel Homme de Hus, took no risks as they calmly put down the first clear round in a smooth ride of 46.27 seconds to take the lead.

Riding second from last, fellow Belgian Nicola Philippaerts went for broke, quickly guiding his mare Katanga v.h. Dingeshof around the course to finish more than two seconds ahead of Guery.

With two Belgians on top of the podium, was Deusser about to spoil the Belgian party in Doha?

Now riding for Stephex Stables in Belgium, Deusser learned his craft at the German stables of legendary rider Franke Sloothaak. Some of the Dutchman's technically flawless yet aggressive style can be seen in Deusser, as the German took a Sloothaak-like sharp turn halfway through the course to take the victory as he shaved more than 1.5 seconds off the time of Philippaerts.

Deusser, who finished third in the title race last year, now leads the LGCT overall rankings with 40 points. His win in Doha earned him a ticket to the lucrative GC Prague Playoffs at the end of the season in November.

Ben Maher of Britain, the winner of the overall LGCT title race in each of the past two years, wasn't competing in Doha.

"Of course, it takes a lot of pressure away to be qualified already after the first competition in Doha," Deusser said. "Which also doesn't mean I don't want to win anymore."

Deusser said he will compete in Mexico City at the end of March and in Miami Beach in early April but isn't sure which horse he will take with him.

"My plan is to be competitive and try to win another Grand Prix," he said, adding that Killer Queen will go home to have a few weeks' rest.

Meanwhile, the London Knights started the Global Champions League (GCL) for teams in the same way they ended it last year: with a bang.

The Knights, the overall GCL title holders in the past two seasons led by Maher, won the GCL in Doha after Belgian twin brothers Olivier and Nicola Philippaerts produced four clear rounds over two days.

French rider Penelope Leprevost and Belgium's Gregory Wathelet of the Paris Panthers were second, followed by the German pair of Philip Weishaupt and Marco Kutscher of the Berlin Eagles. There was disappointment for the local team, the Doha Falcons, who were eliminated from the competition in the first round.

"We all know, there are 18, 19 shows and the wins are very important," said Olivier Philippaerts. "So that's why today, we started with a win, and it could be very important for the rest of the season.

"The season is still very long, but I think London Knights is a very strong team and I think we are going to try to plan every single show as good as possible and have a good ending in the end of the season," added Oliver Philippaerts.

The second leg of the Tour will take place in Mexico City during the last weekend of March.