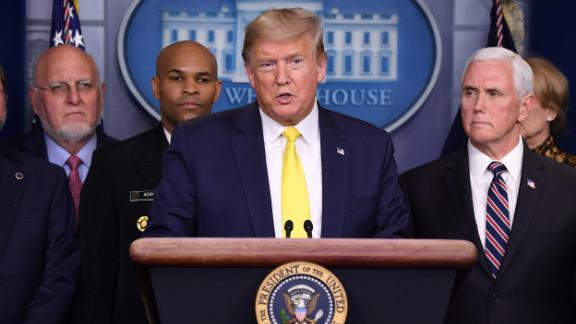 A cruise ship that had been held off the coast of California after people aboard tested positive for coronavirus will continue disembarking passengers in Oakland on Tuesday, as fears about the fast-moving virus ripple across the nation's capital, industries and schools.

At least 773 cases of coronavirus have been reported in the US, including 21 on the Grand Princess cruise ship.

Among the effects of the spreading virus: California's Santa Clara County, home to San Jose, has temporarily banned gatherings of more than 1,000 people after the county reported dozens of cases -- representing one of the widest such orders in the country.

Health and Human Services Secretary Alex Azar said Tuesday the biggest interventions should be reserved for areas with clusters of cases, like Santa Clara County. But he echoed federal health officials' advice for people at higher risk.

"I would encourage any individual who is elderly or is medically fragile to think long and hard about going into any large gathering that would involve close quarters and potential spread," Azar told CNN's "New Day."

In Oakland, the Grand Princess cruise ship began to disembark passengers Monday after spending days in limbo off the coast of California. More passengers will be removed from the vessel Tuesday morning, according to an announcement from the ship's Captain John Harry Smith.

The ship's operator, Princess Cruise Line, said that disembarking passengers would be a "multiple day process."

US stock market indices were darting between positive and negative territory Tuesday afternoon, a day after the Dow had its worst day since the 2008 financial crisis, as the White House began pitching a payroll tax cut to ease the economic fallout.

But effects on daily life and business are growing. Pearl Jam postponed the North American leg of its tour; Boston canceled its St. Patrick's Day Parade; US airlines are slashing domestic and international flights; and the United Nations said it would close its New York headquarters to the public starting Tuesday night.

Schools including Harvard, The Ohio State University, the University of California and Berkeley are temporarily closing classrooms on campus in favor of online instruction.

And as people in six states vote Tuesday in presidential primaries, at least six US lawmakers are self-quarantining or isolating themselves after coming into contact with an infected person -- though House Speaker Nancy Pelosi said Monday that the Capitol should not shut down.

The outbreak has dealt a blow to the cruise industry, with the US Centers for Disease Control and Prevention and the State Department both warning against cruise travel -- especially for people with underlying health issues -- and two vessels prohibited from entering port over concerns about the virus.

The Grand Princess, carrying more than 3,500 passengers and crew members, was finally allowed to dock at the Port of Oakland on Monday after being held at sea for several days. The vessel had been in limbo after officials announced that a passenger who had previously sailed on the ship had died of the virus.

Passengers leaving the ship will undergo medical screening while at the port by the US Department of Health and Human Services and the CDC, according to a statement from California's Travis Air Force Base.

Those showing symptoms and those in need of medical support will be the first off the vessel, ship Capt. John Harry Smith said. Asymptomatic passengers will be taken to military installations in California, Georgia or Texas for screening and a 14-day quarantine.

In Florida, the CDC issued a no-sail order to another Princess Cruise Line ship, the Caribbean Princess, after learning two crew members had transferred from another vessel where at least one guest tested positive for the virus. Neither crew member appears symptomatic and they are both remaining in their cabins out of an abundance of caution, Princess Cruises said in a statement.

The Caribbean Princess will make a brief stop at Grand Cayman for test kits and then set sail for Florida. The ship is expected to remain anchored off the coast of Florida until the no-sail order is lifted by the CDC, the statement said.

At least 26 people have died from the virus in the United States -- 22 in Washington state, two in Florida and two in California.

A nursing home in a Seattle suburb has become the epicenter of the US outbreak. Nineteen people with ties to the Life Care Center of Kirkland have died. Dozens of residents have been transferred to hospitals, leaving 55 residents at the facility that housed 120 in mid-February.

Many of the nation's coronavirus cases have been in Washington, where at least 180 people have been infected.

Hotels were suffering a slowdown in the Seattle area, as many of the cases have been reported in King County. Average hotel occupancy in Seattle last week fell to as low as 30%, according to the Visit Seattle nonprofit marketing group.

In New York state, at least 173 cases have been reported. Officials there have urged more than 2,500 people to self-quarantine, and Gov. Andrew Cuomo declared a state of emergency Saturday.

Self-quarantine is reserved for people who may have come into contact with someone who was infected. People in self-quarantine are asked to remain at home until it can be determined that they are not ill. Health officials can issue orders to make those quarantines mandatory and make violating them illegal.

Azar: 'We don't know' how many Americans have been tested

Azar, the Health and Human Services chief, said Tuesday his department does not know how many Americans have been tested for coronavirus.

"We don't know exactly how many, because hundreds of thousands of our tests have gone out to private labs and hospitals that currently do not report in" to the CDC, Azar told CNN's "New Day" when asked how many Americans have been tested for coronavirus at this point.

"We're working with the CDC and those partners to get an I.T. reporting system up and running hopefully this week where we would be able to get that data to keep track of how many we're testing."

The HHS chief also said there are 2.1 million testing kits currently available and more than 1 million have been shipped.

The lack of availability of test kits to health care providers has been one of the most scrutinized aspects of the federal government's response to the crisis, leading to frustration among state and local officials. There has also been confusion among Trump administration officials over the number of testing kits that have been mailed out.

Guidance for every American and every community

Early data suggests older people are twice as likely to have serious illness from the novel coronavirus, according to the CDC, which advises older people and those with severe chronic medical conditions to stay home as much as possible.

But preventing the continued spread of the virus will depend in large part on community action, officials said Monday at a White House coronavirus briefing.

Officials urged people to stay home from work if they or a family member are sick, use video conferencing for meetings and stop handshaking. At schools, faculty, staff and students are advised to disinfect doorknobs, limit food sharing and strengthen health screenings for cafeteria staff.

And at home, Americans should clean their hands at the door, provide a protected space for vulnerable household members and clean utensils regularly, according to the tips tweeted by Vice President Mike Pence.