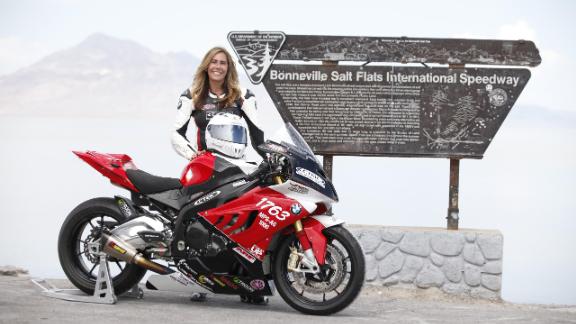 While Valerie Thompson will have to wait to attempt to break a world speed record due to coronavirus, the Queen of Speed knows it's only a matter of time before she hits 416mph.

She was an outsider trying to enter the predominately male environment of motorsport. She didn't expect an easy ride, but even now there's a sense of sadness as Valerie Thompson recounts the meanness she encountered.

Thompson is the fastest woman on two wheels -- in 2018 she surpassed 328.467 mph on a motorcyle at Australia's Speed Week. But before the records came the bullying.

"I tried to have a beer once in while with them and just trying to fit in guy-talk-wise but that wasn't working for me," she told CNN Sport, recalling the days of trying to break into motorsport.

"Just doing mean things to me," added Thompson, who had been scheduled to return to Australia at the end of March with the intention of smashing the 415.867 mph class record for a four-wheel blown fuel streamliner powered by a piston engine. Her record attempt has had to be postponed because of the coronavirus pandemic.

READ: 'I'd rather not go through it again.' Tayla Harris stood up to vile trolls and became a symbol of defiance

Racers are often born into a racing family, but not Thompson.

She tried street racing, but admits she was "a little bit out of control" before graduating to drag racing. Even then, just supporting her friends as a spectator, the need for speed didn't fully grip Thompson.

However, that all changed the moment that she gave it a go herself. "When I did it my self, I really fell in love with the racetrack, and I never looked back."

The Washington State native worked in a bank for 13 years before she was handed the choice of either relocating to Ohio with her company or starting afresh in Arizona -- the opportunity to venture out and start a racing career was just too good to turn down.

After a slow start, Thompson's fortunes began to change when she started to win races. However, given her previous banking career, money remains very much on her mind.

"Now I'm spending my retirement, I'm spending money on travel and expenses (because) the faster you want to go is the more money it costs," the 'Queen of Speed' explained. "Now I live from paycheck to paycheck.

"It's okay, I get to at least enjoy what I'm doing because people in their lifetime don't even know what their passion is."

Alongside Thompson, the late Jessi Combs -- known as the "fastest woman on four wheels" -- was one of the few females in land speed racing.

As she blazed her trail in a predominantly male oriented sport, Thompson grew a "thicker skin" while also attempting to avoid ruffling too many feathers by making the guys "forget (she) was female."

However, gradually she embraced her femininity and her career blossomed.

"When I started to come out of the woodwork in 2008, I had a pink bike, I had pink leathers, and I dazzled my helmet and my shoes with bling on it," she remembers.

"And then I started to become a real racer because I was so much more confident in being a woman in a male dominated sport.

"It just took my racing career to a new high. When I started dressing like a woman, acting like a woman and showing and showcasing my bling, is when my world started to open."

As one of the few women in the sport, she frequently receives messages of support from fans, often expressing their admiration for her. But although she appreciates her position of influence, she does not believe the gender of the driver should matter.

"When you're in a machine, a bike, a car, or any type of race, even in a regular car, the car, the bike, it doesn't know if you're male or female."

In the history books

As an eight-time land speed record holder, Thompson is now a member of the fabled Sturgis Motorcycle Hall of Fame, gaining entry with seven 200 mph runs and one 300 mph run.

Being "talked about" once you've retired is one of the things that drives Thompson on.

"To be in the record books and a part history, I mean, there's no amount of money that can pay for that," she said.

"You can't pay to have your name in the 200 mile per hour Bonneville membership club for life. You're in there for life, you don't get out.

"The clubs are very prestigious. It's like Tiger Woods' green jacket where you get to wear it. It's a prestigious thing. It's like winning a championship, your name doesn't get taken away unless they take the championship away from you."

Although she etched her name into the record books in Australia in 2018, not everything went as smoothly as she would have liked.

Just days before her successful record-breaking run, in an attempt to smash the motorcycle land speed record of 376 mph, Thompson crashed while traveling at 343 mph -- somehow she miraculously managed to walk away with just a few cuts and bruises.

Ever since, she has focused on four wheels, and the opportunity to come back to Australia -- whenever that is -- , after being told she "can't do it" by "so many people" and perform for the crowds is something that has driven her on.

"I'm really just looking forward to ... show them that I'm coming back with a comeback vengeance because (last time) I crashed," the former banker explained.

READ: Phoenix from the flames: MotoE takes to the circuit just months after fire

'The longest 55 seconds of my whole life'

Thompson's record-breaking run in the BUB 7 Streamliner -- she reached a speed of 328.467 mph -- is the subject of the documentary "Rockets and Titans" which is in post-production.

"On the outside, everything looks very fast and very easy," she explains. "But (on) in the inside, when you are watching and you have the front row seat to history, the acceleration is monstrous.

"It's a picture of insanity. You're focused, everything is loud, thrilling, bumpy, calming and everything is completely in slow motion in my view and in my body. And I'm only doing it for 55 seconds. But it's the longest 55 seconds of my whole life."

In professional sport, there is very little room for error. In Thompson's sport in particular -- where athletes also push the technological boundaries of their vehicles -- the margin for error becomes even smaller.

"You have to be 100% perfect, but there are sometimes where things aren't perfect, and life is not a perfect world," said Thompson as she reflected on the dangers of her sport.

"When I broke a record of 328 mph in my motorcycle, about five or six things went wrong. My shift light came down, my latch to the canopy came undone -- just one little clip came undone -- the car was running on three cylinders, not four cylinders, it was bumpy, and it never had been bumpy before because it was running so well."

But while her attempt at the end of March has had to be put on hold, Thompson's sights remain firmly set on making history.

"My mission is to become the world's fastest female on four wheels and the fastest on two wheels."