More than 10,000 people in the US have died from coronavirus. And officials say this will be the most challenging week yet 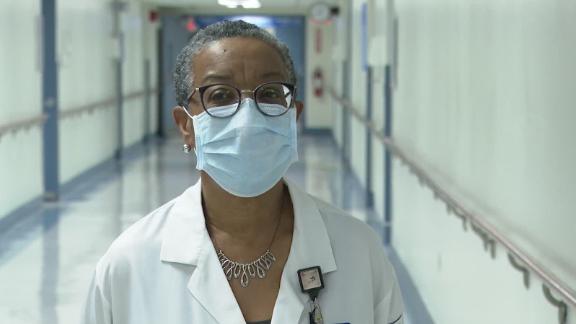 CNN's Miguel Marquez goes inside an emergency room at the forefront of the coronavirus pandemic to show what the healthcare workers are up against.

In just six weeks, the US death toll from coronavirus went from zero to more than 10,000.

That grim milestone was reached Monday, shortly after officials warned this will be the toughest week yet in the pandemic.

Michigan hospitals are three to six days away from running out of critical supplies, the governor said.

Mortuaries in New Orleans are already out of space, and the mayor said she needs help getting more refrigeration.

And New York, New Jersey and Detroit will see peaks in hospitalizations and deaths this week, a US Health and Human Services assistant secretary said.

Other US cities will experience their own peaks in the coming weeks, Dr. Brett Giroir told NBC's "Today" show. He said the peaks reflect infections that occurred two or three weeks ago.

"We may be seeing the worst upon us right now in terms of outcomes," Giroir said.

Nationwide, the virus has infected over 347,000 people and killed more than 10,300, according to data compiled by Johns Hopkins University.

But there could be many more deaths from coronavirus than we realize, the US Centers for Disease Control and Prevention said. Some "may be misclassified as pneumonia deaths in the absence of positive test results," the CDC said.

"We really are just seeing the tip of the iceberg, and a lot of it has to do with the tests we have available," said Dr. Panagis Galiatsatos, a critical care physician at Johns Hopkins Medicine in Baltimore.

Yet there are also signs of progress. More Americans are finding creative ways to help. And in the US epicenter of coronavirus, New York City, the worst of the pandemic might be over soon.

What hotspots across the country are grappling with

At hospitals in Michigan, "we are running dangerously low on PPE," or personal protective equipment, Gov. Gretchen Whitmer said.

At some hospitals, "there are less than three days until face shields run out, and less than six days until surgical gowns run out," she said.

The New Orleans convention center, which sheltered Hurricane Katrina evacuees 15 years ago, has now been converted into an emergency hospital. It's set to open Monday.

Across Louisiana, more than 14,000 people have been infected with coronavirus and at least 512 have died. Gov. John Bel Edwards said his state could run out of ventilators by the end of the week if cases continue to surge.

But the hardest-hit state, New York, reported the number of deaths is not rising as sharply as it has been.

"While none of this is good news, the flattening -- possible flattening of the curve -- is better than the increases that we have seen," Gov. Andrew Cuomo said.

He said the rate of infection is going down, and that's because "social distancing is working."

But Cuomo said New Yorkers must not be "overconfident" and ease up on distancing. He said other places have loosened social distancing rules too soon, only to face consequences.

"We're not going to make that mistake," he said.

This week is Holy Week in the Christian faith, culminating with Easter on Sunday.

The Jewish holiday of Passover starts Wednesday evening. And the Muslim holy month of Ramadan begins later this month.

Boston Mayor Marty Walsh said he empathized with worshipers but implored them to stay home.

"I know it's a very difficult thing, as a Catholic," Walsh said.

Many states have exemptions from stay-at-home orders for religious gatherings. But even in states with stricter orders, some church leaders are defying the rules and still holding service.

The Rev. Tony Spell of Life Tabernacle Church in Baton Rouge, Louisiana, was charged last week with violating the state's ban. But on Sunday, he and 1,200 congregants gathered again.

"We don't get our rights to worship freely from the government. We get those from God," Spell said Sunday. "We'd rather obey God than man."

Many places of worship are holding services virtually to help mitigate the spread of coronavirus.

With no end to this pandemic in sight, more Americans are getting creative in helping fight the virus's spread.

The VA is helping in New York, New Jersey, Louisiana, Michigan and Massachusetts.

The surge in people wearing cloth masks in public came after the CDC said it could help prevent asymptomatic carriers of the virus from infecting others.

And 3D printer companies are stepping in to help hospitals in dire need of face shields.

Doctors and nurses say any help is needed.

In one Brooklyn emergency room, it seems almost every patient -- no matter what they came in for -- is found to have coronavirus, Dr. Sneha Topgi said.

"I think we're still at the beginning, and I am scared," Topgi said. "I'm scared for myself, and I'm scared for everyone in general."