Trump is not 'kidding,' he's lying 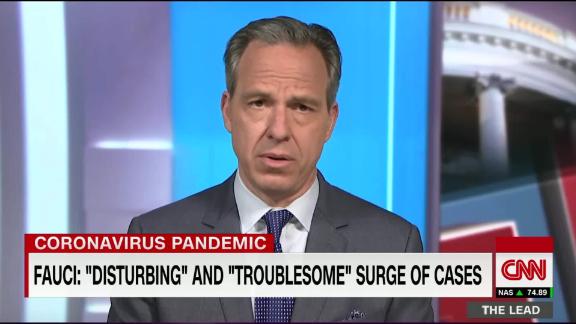 President Donald Trump paused to strafe the country with lies once again Tuesday morning, before climbing aboard a helicopter for a series of campaign events in Arizona, including another life-endangering crowded campaign rally.

On the White House lawn, Trump clarified one of the most outrageous statements from Saturday's Tulsa rally, when he told admirers who risked infection to see him that the number of coronavirus cases in the United States is climbing because the US is testing more people. Therefore, Trump said he told his people to "slow the testing down please."

Because testing saves lives, his staff rushed to clean up the mess, with multiple officials claiming Trump was joking. But on Tuesday, when asked about his comments, the President declared, "I don't kid." With that, Trump crushed the credibility of his loyal staff, leaving them for roadkill on the littered personnel path of this presidency. Just Monday, Press Secretary Kayleigh McEnany had repeatedly denied Trump ordered a slowdown in testing, repeating that the comment was made in jest, something Trump's trade adviser Peter Navarro and others had maintained. Now we have further confirmation, from the President, that we cannot believe what they tell us.

But that's barely remarkable. What stands out from Trump's pre-chopper presser is his increasingly determined effort to lie to the American people about what is happening with the pandemic in the United States.

That's where his false claim that the testing is the reason for the higher numbers comes in.

Testing -- as CNN Dr. Sanjay Gupta explained in response to the lies in an op-ed by Vice President Mike Pence -- actually helps bring the numbers (and the deaths) down. "If you are doing enough testing," Gupta tweeted, "cases should start going down because you are finding people early before they spread it." Some places that are testing more are having fewer cases, and vice versa.

Again, testing saves lives. Trump has claimed it's a "double-edged sword." But there is no second edge, no harm in testing, except as Trump seemingly perceives it, to his reelection chances.

What Trump is trying to do is convince the public that the continuing disaster that is his handling of the crisis is not really happening. Don't look at the growing number of cases and deaths, he's telling us; it's a mirage. Everything's okay.

But as the director of the US Centers for Disease Control and Prevention, Dr. Robert Redfield, said on Tuesday during a House hearing on Trump's response to the coronavirus, "We're going to probably spend close to $7 trillion because of one little virus."

Trump apparently believes that fewer tests will help create the illusion of the opposite. If more people die, so be it. That's the same tactic driving the careless economic reopening he cheers, and the return to his dangerous rallies, which may have already sickened several of his own staff.

It's all reminiscent of what former National Security Adviser John Bolton said about Trump's foreign policy in a recent interview with ABC News. "There really isn't any guiding principle," Bolton said, "other than what's good for Donald Trump's reelection."

As the November election draws closer, Trump's handling of the virus is increasingly driven more by a calculation of Trump's political benefit than the welfare of the American people.

Most Americans agree that Trump did a lousy job in the early stages of the pandemic. For a time, he listened to the experts. But with the White House coronavirus task force taking a backseat, listening to experts seems to be over now -- especially because the election is little more than four months away.

Tuesday morning he claimed that, "The reason we have more cases than other countries is because our testing is so much." False. America is testing a smaller share of its population than many other countries.

Trump said, "We have a very low mortality rate, just about the best in the world." The US has one of the world's highest rates of Covid-19 deaths as a share of its population. Above all, Trump, always feeling sorry for himself, wants you to believe that, "We are doing a great job. We have never been credited for it."

These are lies, damn lies, and Trump's efforts to deceive the American people and the world about a public health catastrophe. The United States has the world's highest number of cases and deaths from Covid-19, twice as many as the second worst-afflicted nation, Brazil.

When it comes to new deaths from Coronavirus -- not tests or diagnoses, deaths -- the US is performing dismally. Other rich countries have brought the curve down.

The US has not. In fact, the country doesn't compare particularly well to poorer nations that are struggling to contain the virus without the abundance of resources of what Trump called "the world's greatest economy," before the pandemic struck.

Trump wants Americans to believe the problem is over; he did a great job solving it, and we can start getting back to normal. Tragically, many Republican governors are following his lead, ignoring the recommendations of government experts, which is leading to more deaths.

More than half the states in the Union are seeing new spikes in the number of cases.

Hospitalizations are climbing, deaths are projected to increase, and the President is lying about it for a perceived personal political benefit. The strategy may well backfire -- it has so far, as the polls show -- but he has not relented.

Trump didn't cause the coronavirus, but in his efforts to protect his political interests, he is lying to the American people and prompting individuals and politicians to act irresponsibly. Trump's clumsy manipulation of the facts may lead more Americans to their deaths.

Hi: 43° Lo: 41°
Feels Like: 35°
More Weather
A cold front is currently moving through our area this morning dropping temperatures into the lower 40s and upper 30s. Today will be a cool day with highs in the upper 40s and lower 50s with increasing clouds. Temperatures will fall into the lower 30s tonight. We could see a few areas of light rain and drizzle this evening, but precipitation chances will start to increase overnight into tomorrow morning. With the sub freezing temperatures, precipitation will transition from light rain and drizzle in the evening to snow overnight into Tuesday morning. Snowfall will continue through the morning hours on Tuesday before transitioning to a rain/snow mix while it exits the area. Most areas will see around 1-3 inches. Accumulations will stay mainly on grassy and elevated surfaces, but expect slushy road conditions Tuesday morning. Conditions will slowly start to improve for the rest of the work week with sunshine returning and temperatures slowly warming. Rain chances will return for the end of the work week.

The Sound of Speed Airshow is returning May 1st

Continued support after family of 4 killed in crash