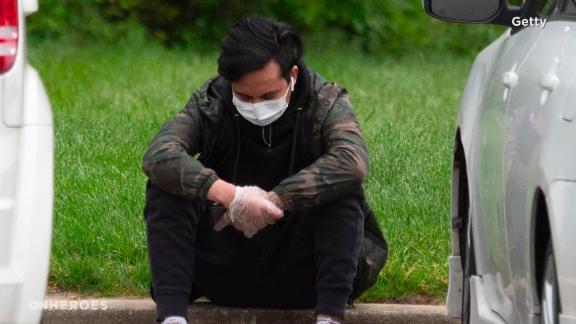 The coronavirus has caused so much loss as the fight against racial inequity weighs heavily on our nation's soul. CNN Heroes Annette March-Grier and Mary Robinson share their tips for managing the sense of anguish and loss.

The numbers are appalling. Over the last several weeks, health officials, think tanks and journalists have begun to absorb and analyze new and distressing statistics revealing racial and ethnic disparities in the rates of illness and death from Covid-19.

Charts from the Brookings Institution, which analyzed recent data from the US Centers for Disease Control and Prevention, show that the disparities are worse than we thought.

As states continue to open up, many of them moving too quickly from one phase to another, Black and Hispanic Americans remain at a higher risk of infection and death -- as much as eight to 10 times higher -- than their White counterparts. The overwhelming message to these communities is seemingly: We see the data and we don't care.

When the early breakdown of how Covid-19 was impacting Black and Latinx communities at an alarming rate was released, health experts rushed to try to connect the dots as to why this was the case. But members of these communities already understood what the problem was.

It was that Black and brown Americans are more likely to be essential workers in industries like agriculture, meatpacking and health care. If they were not laid off, communities of color remained on the job during lockdown because many of the jobs that are disproportionately held by Black and Latinx people do not offer the luxury of working from home.

Simply put, our survival depended on us showing up.

Couple that with the fact that nearly 40% of those deemed to be essential workers by our government earn less than a living wage, according to analysis from New America, and you see how our circumstances made us more vulnerable to the virus.

These are not just statistics to us; these are our communities -- real people with real lives.

Not to mention that the comorbidity element that has been shown to heighten the risks of health complications once the coronavirus is contracted, also makes Black and Latinx communities more susceptible.

For example, we have been struggling for years -- generations even -- with the factors that contribute to the prevalence of obesity and diabetes in our communities. We are less likely to have access to healthy food and more likely to lack access to good healthcare.

We could have told you when this pandemic started that it would be felt most heavily in communities of color in the United States. We have been telling you for weeks that the aid intended to help with the economic fallout isn't reaching our communities to the extent intended. We have been objecting for months to the fact that, for immigrants in our communities as well as their families, no federal aid was intended at all.

This is the lens through which we now view the turmoil over how and when the states should reopen. We hear the cacophony of conflicting messages coming from government officials, including those, like Vice President Mike Pence, who are so eager to get the economy going that he's willing to falsely tell us that the surges taking place in dozens of states are the result of more testing, not more sickness.

We understand what's being communicated when President Donald Trump orders meatpacking workers back on the job despite staggering infection rates in the industry. We weren't surprised that his vague promises of protection for those workers amounted to nonbinding guidance from the agency charged with protecting the workforce.

Message received: supplying the country with meat is worthy of action, but protecting the workers who make it possible, who are overwhelmingly people of color, is not.

I do not envy the officials who have to make the difficult decisions about how and when to reopen. I am a policymaker, and I know that data-based policymaking is essential in these situations; following the numbers and choosing a point at which to take action will create winners and losers.

It is almost never possible to act without causing harm. But we must be honest about who is most at risk, and transparent about what the implications of our decisions will be.

Some states, such as Louisiana, are slowing down their reopening efforts as cases surge, and many state and local leaders have their eye on strategies to reopen in a way that creates room for those who are older or have underlying conditions to stay relatively safe.

Doing this well will require herculean feats of testing, tracing and monitoring, which most states are not yet equipped to carry out. Yet some governors, with the support of our President, have been careening forward in willful disregard of the evidence, which now unequivocally tells us that these decisions will have a disproportionate impact on Black and brown lives.

The African American and Latinx communities have at least as much stake in reopening the economy as everyone else, but we also recognize what we are hearing in the discussion about reopening. We watched Governors Doug Ducey in Arizona and Greg Abbott in Texas as they announced their plans to reopen despite the trendlines in both states - no masks required - and we got the message. Arizona is 30% Latinx, and over half of the population in Texas is either African American (12.9%) or Latinx (39.7%).

We heard the governors' blithe reassurances that their states were ready for the surges that would follow, and based on what we know about the disparities in rates of illness and death, we have a pretty good idea of who would be filling many of those hospital beds. We knew what was coming, and it came; hospitals in Texas are running out of capacity, and Gov. Abbott is again urging Texans to stay home.

We listened with outrage as Florida Gov. Ron DeSantis, who failed to make testing and protective gear available and also opened his state in defiance of what the data was telling him, had the gall to blame Hispanic migrant workers for the outbreaks in his state.

This from a leader of a state, which is 16.9% Black and 26.4% Latinx, that has been scrutinized for allegedly reporting inaccurate Covid-19 stats, to suggest that cases were declining.

Governors, you are putting the lives of the people in your states in danger. The data showing us that Black and brown Americans are doing a disproportionate amount of suffering and dying make it inescapably clear: we know whose lives you are risking, and you are telling us exactly how much you value them.

Hi: 78° Lo: 68°
Feels Like: 69°
More Weather
A cold front moved through last night, giving us thunderstorms but left us with a significant cool down from the heat we've had the past couple of weeks. Today we saw a few light showers and temperatures in the low 80s for our high. Tonight should be cool as well with lows in the lower 60s and calm winds. Dry and sunny conditions continue into next week as temperatures stay seasonal. Highs look to stay in the 80s until midweek and the humidity will be moderate, feeling a lot more comfortable than last week. Scattered showers and storms will continue off and on mainly through the morning and afternoon hours on Saturday. Temperatures will be much cooler on Saturday with highs in the mid 80s. Dry and sunny conditions will take over on Sunday and continue into next week as temperatures stay seasonal.

Mother charged in connection to death of Gower baby boy, abuse of another