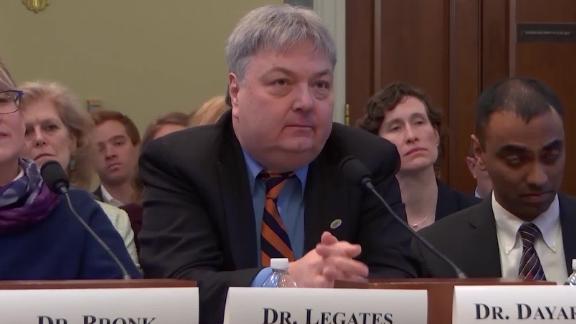 David Legates, a longtime climate change skeptic, has been appointed by the Trump administration to help run the National Oceanic and Atmospheric Administration, the federal agency charged with producing "much of the climate research funded" by the government, The Washington Post reports.

What do you say about a 75-year-old dream that has died? In 1945, Vannevar Bush, the MIT dean who mobilized American science during World War II, laid out the blueprint for what would become the social contract between science and American society for the next half century.

America would support science -- particularly through a new agency, called the National Science Foundation (NSF) but also through existing or expanded federal agencies such as NASA, the Weather Service, and the US Geological Survey -- and in return science would support America, through technical innovation that would better our material conditions and information that would enable us to face life's challenges and solve them.

Government was key to Bush's vision: the NSF would be a federal agency and it would be the federal government, through Congressional appropriations, that would support basic scientific research, trusting that the investment of taxpayer dollars would be readily repaid.

For several decades, that dream seemed to be fulfilled. Congress generously supported science, and both Republican and Democratic presidents signed the relevant appropriations bills. Those presidents also appointed highly qualified people to run science-oriented agencies like the Environmental Protection Agency, NASA and the National Oceanic and Atmospheric Administration (NOAA).

And science, by and large, delivered on Bush's promise. Scientists developed safe and effective vaccinations against deadly childhood diseases, advanced the development of computer science and artificial intelligence, created a theoretical framework for understanding why earthquakes happen where they do, and learned to make remarkably accurate weather forecasts. Not all of this was done on the federal dime, but an awful lot of it was.

But then many things changed, one of which was climate change. Already in the 1960s scientists were predicting that burning fossil fuels would change our climate in dangerous ways, and by 1988 they were telling us that the climate was, indeed, changing. But, starting in the 1990s, rather than accepting these facts and finding ways to act on them consistent with our values and principles, conservative political and business leaders began to discount and deny them.

As the evidence got stronger, denial did not yield to acceptance, begrudging or otherwise. Instead, the denial got increasingly aggressive and belligerent.

Today, denial has become deadly. The Western United States are reeling in the face of unprecedented economic and ecological damage from wildfires and the choking smoke those fires have left in their wakes. As fires continue to rage, one Oregon official has advised people to brace themselves for a "mass fatality incident." Meanwhile, yet another monster hurricane is bearing down on the Gulf Coast -- while four other tropical storms are churning -- an almost unprecedented event.

The damage and destruction of "extreme weather events" -- fueled by man-made climate change -- is no longer a prediction, theory or hypothesis. It's our regular reality. We are losing both lives and livelihoods.

And in the midst of this hydra of climate-fueled catastrophe, what is our President, Donald Trump, doing? Hiring a notorious climate science denier, David Legates, to help run NOAA -- the federal agency most responsible for providing us with good climate information. The Washington Post reported this week that Legates formerly served as Delaware's climatologist but was "forced out" because of his "controversial views" on the issue.

But while the proposed appointment has been duly reported in the press -- and scientists have duly protested -- it sadly isn't news. This administration has repeatedly placed people who have questioned or rejected science in positions of authority throughout the federal service. Vice President Pence rejects evolutionary theory and suggested that smoking doesn't kill, and the President himself, as is well known, has claimed that climate change is a hoax.

Another day, another outrage.

Under these circumstances, it is tempting to respond by defending science and scientists, and by calling for more funding for research, more STEM education, and more scientists in the pipeline through greater efforts at inclusion. But the reality of the past two decades is that that approach doesn't work. As scientific conclusions become more indisputable, the machinations of those who are threatened by it become more outrageous.

It is evident that our scientific social contract is broken. Too many of our political leaders no longer seem to believe that science serves our national purpose. They see scientific evidence not as something to work with, but something to be worked around.

The writer and Iraqi war veteran Roy Scranton has written that the way he managed the dark reality of warfare was to embrace his own death. Each day, he would wake up and tell himself that he needn't fear, because he was already dead. "The only thing that mattered was that I did my best to make sure everyone else came back alive."

Scranton's experience mirrors that of John Kerry in Vietnam, where he reminded himself that "every day was extra." When Scranton returned home, however, he was shocked to find federal troops in New Orleans, and then in New York and New Jersey, as military units were called in to deal with the chaos of climate change. He concluded that, as in Iraq, he needed to embrace the reality that the world as he knew it was already dead. Only then could he begin to look ahead and plan for a different future.

When we register our outrage at the latest governmental assault on science, we continue our own version of denial. We cling to Vannevar Bush's dream of a social contract where scientists generate knowledge and understanding, and our leaders and fellow citizens appreciate that knowledge and apply that understanding.

The unfortunate reality is that our elected government is increasingly populated with many men and women who do not merely ignore scientific facts, they appear to despise them and the people who produce them. They see science as something that stands in the way of their political goals, and therefore must be pushed out of the way.

The solution to this cannot be a call for more science or the restoration of "scientific integrity," whatever that is. We have tried that and it has failed. There comes a point when maybe one simply has to accept that the dream has died and it is time for a new one. I don't know what a new social contract for science would look like, but I am pretty sure it is time to start looking for it.