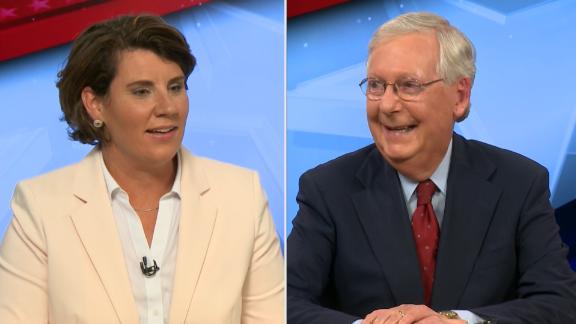 Mitch McConnell appears to think this is some kind of joke.

At a televised debate Monday night, Amy McGrath, who is running against McConnell for a US Senate seat from Kentucky, noted again and again that a pandemic has plunged the country into an unrelenting crisis and McConnell's Republican-controlled Senate is refusing to do anything to alleviate the pain. In response, McConnell laughed. And laughed. And laughed.

And then he blamed House Speaker Nancy Pelosi.

More than 210,000 Americans are dead. At least 26 million people are collecting unemployment benefits, and many more than that are unemployed, underemployed, or in danger of losing their jobs.

More than 600,000 women left the workforce in September alone (compared with 78,000 men), according to government data.

And while the Republican controlled Senate, where McConnell is the majority leader, can get it together to hold lightning-speed confirmation hearings aimed at thrusting Amy Coney Barrett onto the Supreme Court before the November 3 election, they have shown no such ability to advance a new relief package for those hundreds of millions of Americans struggling — many with jobs and lives in ruins — as a deadly disease continues its rampage through their communities.

A relief bill is sitting on Mitch "I know how to make deals" McConnell's desk, and he's pushed it aside.

And there's really no charitable reading possible for McConnell's chuckling at a debate over the question of Covid relief.

There's nothing funny about the utter, unconscionable failures over which this Senate Majority Leader has presided. There's nothing funny about more Americans dead from Covid-19 than died in World War I, Vietnam, the Korean War, and the Iraq war combined. Or that while the US contributes just 4% percent of the world's population, it makes up 20% of the world's Covid deaths.

But the point is not only that McConnell found something to laugh about in Covid deaths, although it was striking that chortling was the response he reached for. His laughter-as-answer to McGrath came off as something else, and a reaction that will be familiar to many women: Condescension and dismissiveness. You foolish girl ... You just don't understand how it works. (It's an illuminating bit of video, if you haven't yet watched.)

As for the actual metrics of chaos that McGrath laid at his feet — the unemployed Americans, the dead Americans — McConnell couldn't even pretend to care. The effect was one of arrogance — not to mention stunningly cold and even sexist.

"She mentions she was in the Marines about every other sentence," McConnell said, derisively. "I think her entire campaign is: she's a Marine, she's a mom, and I've been there (in Washington) too long." Translation: She's just a Marine and just a mom; she doesn't know what she's doing, which is why she's questioning what I've done.

The defense McConnell offered for his do-nothing party is that the other side won't negotiate — even though House Democrats did indeed pass a $2.2 trillion stimulus bill early this month, which McConnell has rejected. And McConnell can manage to rally his troops to, as McGrath put it, "ram through a Supreme Court nominee right now, instead of negotiating, which is what he should have been doing all summer long to make that happen."

Despite being a member of the party of personal responsibility, McConnell refuses to accept accountability for the Senate's dereliction of duty on additional Covid relief for Americans. Instead, he blames Pelosi, who gets the bulk of his ire, and he heaps condescension on another woman — his political opponent, McGrath — for having the temerity to even ask.

Kentucky is currently facing a backlog of some 75,000 unresolved unemployment claims — state residents who are out of a job but unable to collect much-needed benefits. Drug deaths, obesity rates and cancer rates are all stunningly high. About 1 in 4 children in Kentucky lives in poverty — and that was before Covid-19 wiped out tens of thousands of Kentucky jobs.

The state saw a remarkable drop in the percentage of uninsured residents, thanks to the Affordable Care Act (ACA), going from 66% uninsured in 2010 to a mere 5.5% uninsured by 2019.

But now, with his state, and the country, trapped in the teeth of a pandemic, McConnell has forced confirmation hearings for a conservative Supreme Court nominee who many believe would join in a decision to obliterate the ACA in a case set to come before the court in just a few weeks.

Now the question is: Will Kentucky voters agree that this is all a laughing matter?

Hi: 73° Lo: 56°
Feels Like: 60°
More Weather
Comfortable and mild conditions are set to continue today with highs in the upper 70s and lower 80s under partly cloudy skies. Winds will be a bit breezy today with gusts up to 25 mph. A weak cold front will move through the area later this evening. Clouds will build into the area today as the front passes. A few isolated areas of light rain can’t be ruled out as the front moves through. Temperatures will remain in the 70s on Saturday under mostly sunny skies. Temperatures will really start to warm up on Sunday with highs in the upper 80s. Above average temperatures will continue through the beginning of next week as sunny and dry weather remains.