Why it's time to retire 'Election Day' 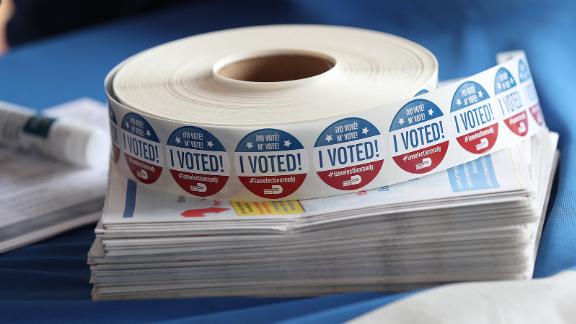 CNN's Brian Stelter talks with Sally Buzbee, executive editor of The Associated Press, about how newsrooms are preparing for election night.

Today is Election Day. So is tomorrow. Yesterday too. So, why do we insist on counting down to November 3? The Covid-19 pandemic has vastly accelerated a trend that has been building for years: voting early. Americans are casting their ballots by mail, drop box or at in early voting locations in record numbers this year.

As we count down to November 3, more than 60 million Americans have already cast their ballots, topping the total of all early votes four years ago. And early polling has only just started in states like New York, Massachusetts, Maryland and elsewhere.

Why then do pundits, reporters and political campaigns still refer to "Election Day"? Across social media and campaigns spots, candidates, their surrogates and political commentators talk about the hours until "polls open" next Tuesday.

Granted, November 3 will see huge turnout -- including voters who show up because their states have not sufficiently loosened policies to accommodate the pandemic, because voting by absentee or by mail proved impractical or simply because they forgot to do so earlier. But some polls now indicate that less than half of voters plan to cast their ballots on Election Day itself.

It's time to retire the term "Election Day" and replace it with a far more clear and more accurate term: "the last day of voting." As for the stage we're in now? Easy: "Election season." This is more than an arcane exercise in etymology. Focusing on the anachronistic notion of a singular election day is a disservice to the public who are already confused by where and how to vote. Worse, it risks reinforcing the notion that in-person day-of votes are more legitimate than votes by mail, a falsehood propagated by President Donald Trump and his allies.

America's definition of "Election Day" had long been evolving. Even before the pandemic upended America's voting plans this year, five states were already automatically sending ballots to every registered voter to submit by mail or drop box: Washington, Colorado, Hawaii, Oregon and Utah. Five more are doing so this year in light of the pandemic: California, Washington DC, New Jersey, Nevada and Vermont.

It's easy to imagine that some of those jurisdictions -- and others in the future -- will permanently adopt vote-by-mail procedures. Many other states, including Illinois, Michigan and Minnesota offer in-person voting long before Election Day -- and every state offers absentee voting ahead of time (though some require an "excuse" to do so).

And, in 2016, just over 58 million Americans voted "early" even without the pandemic, more than a third of the fall election's total. It's hard to argue that something's "early" if it represents such a large percentage of total voters.

In many ways, how and when America votes is long overdue for an overhaul anyway. The idea of the first Tuesday after the first Monday in November was chosen in 1845, when America's agrarian economy, church-going habits, and the sometimes arduous travel distances and primitive modes of transport required for voting in the 19th-century dictated a day in between church on Sundays and market day on Wednesday.

We didn't want our elections to interfere with spring planting or fall harvests either -- and thus: a Tuesday in early November, before winter set in. That's obviously not how America lives anymore, and it's time for us to update our language, too.

As more states and more voters discover the popularity and convenience of mail-in voting, it's likely here to stay. Plus, it's good for democracy -- more people vote -- and there's no evidence that either political party benefits from switching to mail balloting. Over time the first Tuesday after the first Monday in November may become more of a voting deadline than a race to the finish line -- just one of many election days, notable only because it is last.

This change in terminology is part of a necessary widespread re-thinking of the language we use when it comes to elections and voting. News media are moving away from "calling" races, instead using the more careful and precise "projecting" the outcome of a race, since the results collected on election night are always unofficial. Similarly, news organizations are trying to be more precise in not reporting what "percentage of precincts" are reporting, since with absentee and mail balloting, some precincts may report multiple times and votes may continue to change and evolve even with "100% of precincts reporting." That's not fraud -- that's how elections actually work.

Most of all, news organizations are trying to educate and reset Americans' expectations that we should always know the winner of the presidential race the morning after the elections. Counting votes correctly can take time, and that doesn't mean it's nefarious -- results aren't "delayed" or "late" simply because they're not available when the public wants them to be.

Most states don't require final results until late November, and in the presidential race the electoral college doesn't vote until December 14.

Let's find one tiny silver lining amid the chaos and tragedy of 2020 and the pandemic: Let's use this moment to embrace a more accurate and inclusive view of how Americans vote. Welcome to election season! And don't forget to vote by the last day of voting on November 3.

Hi: 65° Lo: 44°
Feels Like: 64°
More Weather
Lots of sunshine across the area today with temperatures warming into the mid 60s. Tomorrow will be a similar day with highs warming into the mid to upper 60s. Cloud will start to build into the area late Thursday night into Friday morning. Rain chances will start to increase early Friday morning with scattered showers likely for the first half of the day on Friday. Several more rounds of rain are likely this weekend as highs warm into the low to mid 70s. A few thunderstorms are possibly as well but severe weather is not likely at this time. Rainfall could be moderate to heavy at times. Rain chances and warm temperatures are set to continue into next week. Friday through Monday most areas could see around 1.5 to 2.5 inches of rain totals.