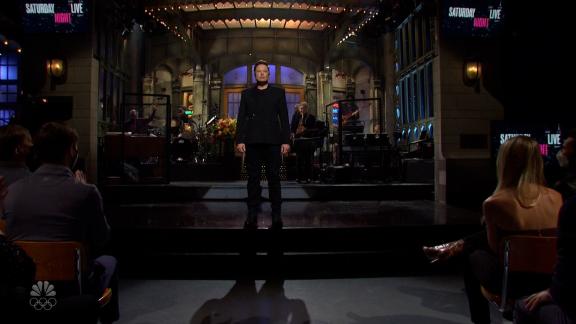 After much fanfare, anticipation and some controversy, eccentric tech billionaire, Elon Musk took the stage to host "Saturday Night Live."

"Saturday Night Live" and billionaire Elon Musk appear to have gotten what they wanted from each other with Musk's appearance as the show's host on Saturday. But the price of this bargain was that "SNL" helped Musk whitewash his horribly irresponsible comments downplaying the risks of Covid-19 and his insensitive remarks about the transgender community.

For "SNL," like all long-running TV shows, it's all about ratings and relevancy. By Sunday afternoon, there were more than 3 million views of Musk's monologue on YouTube and early ratings showed a big win on the audience front.

For Musk, the apparent goal was to make himself likeable to those who know him only as the Tesla and SpaceX founder who has been criticized for his controversial remarks. And if you watched his monologue in a vacuum, Musk did come across likeable and funny. He also candidly acknowledged he had Asperger's syndrome, an autism spectrum disorder that affects language and communication skills. (Although his claim that he was the first person with Asperger's to host was incorrect. Dan Aykroyd, a former "SNL" cast member who hosted the show in 2003, also has the syndrome.)

Musk even brought his mother on stage to joke about his childhood. It was a dream for any PR person working to improve Musk's image. But nowhere did Musk offer any remorse for his particularly reviled statements over the last 13 months.

The most astounding part is that during the show's monologue, Musk actually had the perfect moment to show he had the strength required to apologize. Musk stated mid-speech "Look, I know I sometimes post or say strange things, but that's just how my brain works."

Did he then note it was wrong to undermine the risks posed by Covid or to voice his ridicule about using the correct pronouns for people in the transgender community -- made worse when he defended himself by tweeting: "I absolutely support trans, but all these pronouns are an esthetic nightmare? Nope. Instead, Musk appeared to make excuses for his remarks: "To anyone I've offended, I just wanted to say: I reinvented electric cars and I'm sending people to Mars on a rocket ship." He then added, "Did you think I was also going to be a chill, normal dude?"

Musk missed another opportunity in a riff on people being judged by the "dumbest things" they'd ever done. Incredibly, he thought his dumbest thing was to smoke weed on a podcast. Overall, he seems to be telling us to accept his past -- and any possibly hurtful or irresponsible comments he makes in the future -- because he's a successful executive who helped send people into space. Really? (Ironically, one not-so-smart business move may have been his reference to Dogecoin, the cryptocurrency that he has touted in the past. Its value dropped dramatically after he jokingly called it a "hustle" during the show.)

This is not about demanding that "SNL" -- or any comedy show — avoid people who will attract media coverage. In fact, in order for "SNL" to remain relevant after 46 years on air, it must court some controversy. Before Musk appeared on the show, I wrote for CNN that Musk didn't deserve the "honor" of hosting this show, but I didn't call for the show to disinvite him.

My hope was that Musk would use the show to acknowledge (even comically) that his irresponsible comments and actions had a real-world negative consequence on people's lives. For example, it was not just that Musk slammed Covid restrictions last year as "fascist," he reopened his Tesla facility in Fremont, California, in defiance of the state's Covid guidelines last May. More than 400 employees there tested positive for Covid over the next seven months.

In addition, Musk's comments ridiculing the idea of using the appropriate pronouns for people in the transgender community came at a time that Republicans in state legislatures were gearing up to introduce bills curbing the rights of transgender people across the country.

The pain caused by these laws has led some parents of transgender teens to move from GOP-controlled states because of the anti-trans environment these laws are fostering. Musk could easily have used "SNL" to make the apology requested by the Human Rights Campaign, a leading LGBTQ rights group, back in December.

The bigger issue is that Musk, who boasts nearly 54 million Twitter followers and a devoted base of fans, is sending a message to this massive group of people that this type of conduct is acceptable in our society. Appallingly, "SNL" helped him send that very message in the pursuit of ratings and relevance.

Hi: 57° Lo: 37°
Feels Like: 42°
More Weather
Temperatures will be slightly cooler today thanks to a northwesterly wind and some cloud cover. Highs will still be above average today with temperatures in the mid 50s. A sprinkle or two can not be ruled out today, however most areas will remain dry. Well above average temperatures will return through the end of the work week with highs in the 60s and 70s. Dry and sunny conditions look to continue through the work week into the weekend. Slightly cooler temperatures will move into the area this weekend with highs in the upper 40s and lower 50s.

Biden says new Omicron variant is 'cause for concern, not a cause for panic'