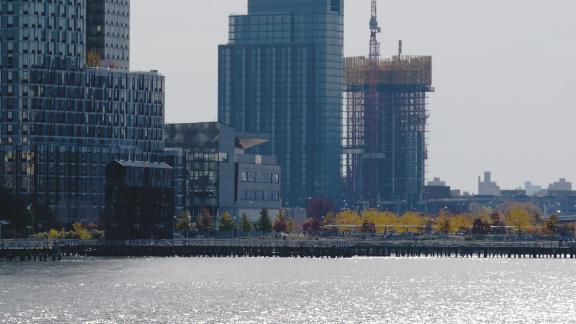 Amazon is ditching its plans to build a new headquarters in New York after facing backlash from members of the community. CNN's Cristina Alesci reports.

Amazon is ditching its plans to build a new headquarters in New York after facing backlash from members of the community.

"After much thought and deliberation, we've decided not to move forward with our plans to build a headquarters for Amazon in Long Island City, Queens," Jodi Seth, an Amazon spokeswoman, said in a statement.

In the statement, Amazon noted that "a number of state and local politicians have made it clear that they oppose our presence and will not work with us to build the type of relationships that are required to go forward with the project we and many others envisioned in Long Island City."

Follow live updates from CNN Business on this developing story

Amazon selected New York City and Northern Virginia in November to split duty as its second headquarters (nicknamed HQ2) after a year-long search. Each city was expected to have more than 25,000 workers over time.

The new headquarters was initially framed by top New York politicians including Governor Andrew Cuomo as a tremendous job creation opportunity that could benefit the broader New York region. All at once, it seemed to cement New York City as a technology hub that could truly rival Silicon Valley.

After the deal was announced, however, critics blasted the $1.525 billion in incentives New York offered to lure the tech behemoth and worried that it would soon lead to longtime residents being priced out of their homes. Protesters took to the streets in Long Island City, criticizing the deal for being bad for taxpayers and the neighborhood.

Amazon's decision on Thursday was met with a mix of disappointment and jabs from politicians frustrated by the company's decision to walk away rather than engage with the community's concerns.

"You have to be tough to make it in New York City. We gave Amazon the opportunity to be a good neighbor and do business in the greatest city in the world," New York City Mayor Bill de Blasio said in a tweet Thursday. "Instead of working with the community, Amazon threw away that opportunity."

Carolyn Maloney, a New York congresswoman, said she was "disappointed" New York would lose out on 25,000 jobs and "hundreds of millions of dollars in new investments."

"The deal could have been improved. There were legitimate concerns raised and aspects that I wanted changed. I was ready to work for those changes," she wrote on Twitter. "But now, we won't have a chance to do that."

Others like Alexandria Ocasio-Cortez, the progressive freshman Congresswoman from New York, hailed Amazon's withdrawal as a victory for members of the community who protested the deal in recent months.

"Anything is possible," she wrote on Twitter. "Today was the day a group of dedicated, everyday New Yorkers & their neighbors defeated Amazon's corporate greed, its worker exploitation, and the power of the richest man in the world."

The pushback against the Amazon deal was helped this month when New York State Senator Michael Gianaris of Queens, who is a vocal critic of HQ2, was recommended to serve on the Public Authorities Control Board.

The relatively unknown board weighs in on any financing and land use deals that run through public authorities, which primarily include economic development projects. It's had some success in the past blocking major projects.

Will New York's pain be another state's gain?

Phil Murphy, the governor of neighboring New Jersey, wasted no time in calling for Amazon to reconsider his state for new offices now that New York is out of the running.

"Now more than ever, Newark is the clear choice as the next presence for Amazon corporate offices," he said in a statement. "Amazon now has the opportunity to join in Newark's story of a city on the rise."

In its statement, Amazon said it has no plans to "reopen the HQ2 search at this time." Instead, it plans to move forward with its office expansions in Virginia as well as Nashville, where it is building a new hub expected to employ 5,000 people.

"We are excited that Amazon's plans for Virginia remain in place and that we can continue working together to position Virginia's dynamic tech sector for healthy, sustained, statewide growth," Stephen Moret, the CEO of the Virginia Economic Development Partnership who helped spearhead the HQ2 negotiations for the region, told CNN Business.

Moret declined to say whether he expects Amazon to add even more jobs to Virginia now that it's forfeiting its major investment in New York.

Even after initial reports last week that Amazon was reconsidering its investment in New York, top city officials, including New York City Mayor Bill DeBlasio, expressed confidence that the deal would go through.

Now the city must grapple with the fallout of what the scuttled deal could mean for its future as a business-friendly destination and a center for technology companies in particular.

"New York City is today one of the most dynamic tech hubs in the world, but there is no guarantee we will maintain this status in the future, which makes this news so disappointing," said Julie Samuels, Executive Director, Tech:NYC, a non-profit network of technology leaders in the city that counts Amazon as a member.

For now, however, Amazon is just one company. Google reiterated plans on Wednesday to develop a new campus in New York as part of its broader real estate expansions throughout the US.

"New York City is still open for business and will retain its status as a world class center for tech and innovation," John H. Banks, president of the Real Estate Board of New York, said in a statement.

Hi: 50° Lo: 25°
Feels Like: 50°
More Weather
Highs will be in the mid to upper 40s on Friday and another disturbance will give us a chance for a few sprinkles across northeast Kansas and northwest Missouri. We dry out and temperatures will gradually climb back into the 50s and 60s by the weekend.

Runaway wheel from semi-truck crashes into vehicle on I-29