Clinic can continue to provide abortions in Missouri, judge rules 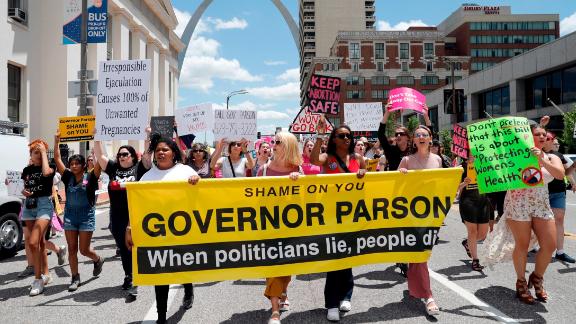 Abortion services can continue for now in Missouri after a judge ruled that its license would not expire at the end of the day Friday. The state had refused to renew Planned Parenthood's license to continue providing the procedure.

Circuit Court Judge Michael Stelzer's ruling does not renew the license. Instead, the ruling allows the current license to remain in effect until the matter can be heard in court again on June 4.

Planned Parenthood "has demonstrated that immediate and irreparable injury will result if Petitioner's license is allowed to expire," Stelzer wrote in his decision. "The court finds that a temporary restraining order is necessary to preserve the status quo and prevent irreparable injury to Petitioner pending disposition of the case on the merits."

If the clinic had to stop providing abortion services, Missouri would have been the first state in the nation to block the procedure in more than 45 years.

A lawsuit against the state was filed earlier this week by Reproductive Health Services of Planned Parenthood of the St. Louis Region, which has provided abortions for more than two decades and is the last remaining clinic to do so in Missouri. Its license to continue offering abortions was set to expire Friday, and the organization argued that withholding the license amounted to another tactic in a years-long effort to "restrict abortion access and deny Missourians their right to choose abortion."

The lawsuit was brought against Missouri Gov. Michael Parson and the Missouri Department of Health and Senior Services, which administers the license the clinic needed. It sought a temporary restraining order against the state, in order to avoid the disruption of services.

"This is not a drill. This is not a warning. This is a real public health crisis," Dr. Leana Wen, president and CEO of Planned Parenthood Federation of America, said Tuesday in a statement.

"Missouri would be the first state in the country to go dark -- without a health center that provides safe, legal abortion care," denying access to "more than a million women of reproductive age" living in the state, she said.

Stelzer heard arguments from both sides on Thursday, as demonstrators gathered to protest what they see as an ongoing assault on reproductive rights.

"If you cut off my reproductive rights, can I cut off yours?" said one sign. Others read, "Governor Parson: shame on you" and "Protect safe, legal abortion."

The outcry came a week after the governor signed into law House Bill 126, which bans abortions at eight weeks of pregnancy, even in cases of rape and incest.

"DHSS now is attempting to shut down [the abortion provider], by unlawfully conditioning a decision on its routine license renewal application on completion of a supposed 'investigation' of a patient complaint," the lawsuit said, the details of which had not been disclosed to Planned Parenthood.

The governor said on Wednesday that the health department discovered during an annual inspection of the facility in March "numerous violations of state laws and regulations."

He would not address questions about the nature of the violations, saying only, "They are well aware of the deficiencies" and that details could not be provided "because it is still an ongoing investigation."

The fact that the St. Louis clinic is the last abortion provider in the state should be irrelevant, Parson said, because "This is about a standard of care for women in the state of Missouri.

"They should have every right under the law to have their license renewed," he said. "But they should not receive any exemptions simply because they're one clinic."

In a statement released Wednesday, Planned Parenthood's president, Wen, said Parson's comments were "not based on medicine, facts, or reality"

At a press conference after the hearing, M'Evie Mead, director of Planned Parenthood Advocates of Missouri, said the state is making decisions in an "arbitrary and capricious way."

Mead said Planned Parenthood has "bent over backwards" to try to comply with rules, while the state continues to change them.

Hi: 32° Lo: 22°
Feels Like: 26°
More Weather
Temperatures will start to warm up on Saturday and Sunday with highs reaching into the upper 30's and lower 40's. The precipitation will stay out of the forecast until the middle part of next week.