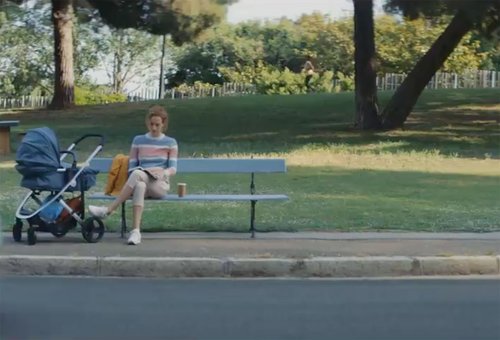 An advertisement juxtaposing male astronauts with a woman sitting by a stroller, and another depicting two hapless dads, are the first casualties of a Britis...

An advertisement juxtaposing male astronauts with a woman sitting by a stroller, and another depicting two hapless dads, are the first casualties of a British ban on gender stereotypes in advertising.

The ads, for Volkswagen and Philadelphia cream cheese, were investigated by the UK Advertising Standards Agency (ASA) after viewers complained they perpetuated gender stereotypes.

New rules that came into force in June prohibit depictions of gender that 'are likely to cause harm, or serious or widespread offense.'

The Volkswagen commercial shows a number of primarily male people taking part in adventurous activities — two male astronauts in space, and a male athlete with a prosthetic leg doing the long jump — before cutting to a mother sitting on a park bench next to a stroller. It prompted three complaints from viewers, and the ASA found it showed a woman 'engaged in a stereotypical care-giving role.'

'We acknowledged that becoming a parent was a life-changing experience that required significant adaptation, but taking care of children was a role that was stereotypically associated with women,' the body added in its ruling.

A second commercial for Philadelphia cream cheese showed two dads looking after their children at a restaurant with a conveyer belt.

The men become so distracted by the food that they lose sight of their babies, who end up circling the restaurant on the belt. 'Let's not tell mom,' says one, after rescuing his child. Over 125 viewers complained.

'We acknowledged the action was intended to be light-hearted and comical and there was no sense that the children were in danger,' the ASA said in its decision.

'We considered, however, that the men were portrayed as somewhat hapless and inattentive, which resulted in them being unable to care for the children effectively,' they added. 'We did not consider that the use of humour in the ad mitigated the effect of the harmful stereotype.'

Neither ad can appear in its current form following the ruling.

A spokesperson for Mondelez International, which produces Philadelphia, said the company was 'extremely disappointed' with the decision.

'We take our advertising responsibility very seriously and work with a range of partners to make sure our marketing meets and complies with all UK regulation.'

Problematic ads can 'contribute to inequality'

The new rules follow a review by the ASA, published in 2017, which found that harmful stereotypes reinforced by advertising 'can restrict the choices, aspirations and opportunities of children, young people and adults.'

A public furor over a 2015 poster on the walls of London's subway system, showing a woman in a bikini with the words 'Are you beach body ready?,' prompted the regulator to look into all gender portrayals in advertising.

The ad — for a weight-loss product — was not initially banned by the ASA, as it did not explicitly break any rules, but the regulator eventually took action due to its health claims.

'Our evidence shows how harmful gender stereotypes in ads can contribute to inequality in society, with costs for all of us,' Guy Parker, chief executive of the ASA, said in a statement in June.

The ASA said commercials will still be allowed to show 'glamorous, attractive, successful, aspirational or healthy people or lifestyles.'

Ads that show men or women carrying out tasks with which their genders are sometimes associated, such as women shopping, will also be permitted.

Hi: 48° Lo: 31°
Feels Like: 44°
More Weather
Monday will be a wet and windy one. Rain will persist through the day and wind gusts will be up to 35 mph. So you might want to grab a raincoat instead of the umbrella for Monday. Highs will be in the middle 40s Monday but they will continue to cool into Tuesday. Mixed precipitation and some small snow accumulations are possible through Tuesday morning. Conditions dry out for the rest of the week and temperatures will gradually climb back into the 60s by the weekend.

Family of Arial Starcher speaks out

First ever Restaurant Week kicks off in St. Joseph