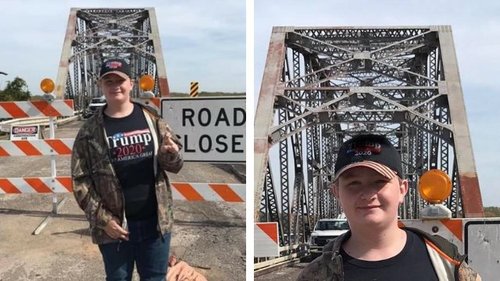 The Missouri Department of Transportation's Northeast District is issuing an apology after posting an edited photo of an Illinois boy on social media.

Louisiana, MO (KMOV) -- The Missouri Department of Transportation's Northeast District is issuing an apology after posting an edited photo of an Illinois boy on social media.

On Oct. 18, MoDOT crews demolished the old Champ Clark Bride, which spanned across the Mississippi River for 90 years. In honor of the implosion, 13-year-old Mitchell Lemons, of Nebo, Illinois, won the opportunity to press the button that would bring the bridge down. Lemons' name was drawn in a raffle after he bought a ticket benefiting local EMS.

The 13-year-old wore a "Trump 2020" T-shirt and matching hat to the event. However, the picture that was posted on MoDOT's Facebook page had Lemon's hat slightly blacked out and the photo was cropped.

Comments such as "Shame on you MoDOT!" and "absolutely ridiculous" were posted under the original photo.

In response to a comment, MoDOT wrote, "We respect all individuals’ choice and edited the picture because many of the comments were detracting from the intent of the post which is to celebrate this young man’s excitement to have an opportunity of a lifetime."

Hours later, MoDOT issued an apology for their error in judgement and posted the original picture.