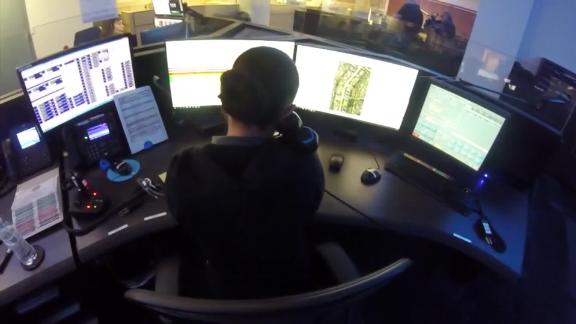 A 911 dispatch supervisor in Coral Springs, Florida, was streaming a movie on Netflix while a caller attempted to get help after her car's windshield was shot. CNN affiliate WSVN reports.

A woman in South Florida called 911 after a bullet came through her car's windshield -- but dispatchers didn't send help right away. Police say they mishandled the call while their supervisor was streaming a Netflix movie.

Guadalupe Herrera was driving near a gas station in Coral Springs on June 9 when what she thought was an object that might be a bullet almost hit her head. She called 911 three times seeking help, but officers were not dispatched until 34 minutes after the first call, according to a Coral Springs police internal investigation, which was first reported by the South Florida Sun Sentinel on Monday.

"I don't know what to do," Herrera told a call taker in one call. "I don't know if I should get out of the car or drive away. What if they shoot again?"

Herrera called 911 a total of three times before she drove herself to the police station.

"It was a very hard situation," Herrera told the South Florida Sun Sentinel. "It was a drive-by shooting. My windshield was shattered. Nobody showed up — I had to drive myself to the agency."

Police said dispatchers failed to send help quickly because Herrera's call was logged as a "suspicious incident" instead of a shooting.

When investigators looked into the incident, they found that the shift supervisor, Julie Vidaud, had been streaming Netflix's film "I Am Mother" starring Hilary Swank on her computer for about two hours during the time Herrera was trying to get help, a report of the investigation said. The supervisor told investigators that although it may have been streaming, she would not have been watching during the time in question.

Investigators reviewed data from Vidaud's computer, which showed that her most used applications were Netflix, Hulu and Xfinity TV, the report said.

It was unclear what exactly Vidaud was doing at the time of the incident, the report said, but she failed as supervisor during the handling of the calls. "The investigation has established beyond a reasonable doubt that Vidaud missed a critical incident that was mishandled by the call taker and dispatcher," it said.

In a statement, Coral Springs police said Vidaud has been disciplined for "failure to supervise," which could result in a two-day suspension without pay. "I failed at that particular call and I hate that," she told an investigator, adding she did "everything that I was supposed to do" after learning about the delays in police response.

Police Sgt. Carla Kmiotek told CNN that Vidaud is not authorized to speak about the incident because she is still employed. CNN attempted to reach Vidaud on Wednesday night but did not immediately hear back.

The two 911 operators who handled Herrera's calls are no longer with the department. One has been fired and the other was disciplined and later terminated, police said.

In the wake of the incident, the agency has changed its policy and will no longer allow any streaming of media services during their shifts.

A suspect in the shooting has been arrested and has pleaded not guilty to attempted murder, according to Broward County court records. The case remains pending.

Hi: 90° Lo: 66°
Feels Like: 75°
More Weather
A cold front will move through Wednesday night into Thursday giving the chance for showers and thunderstorms across the area. Temperatures will remain in the low 90s through Saturday.