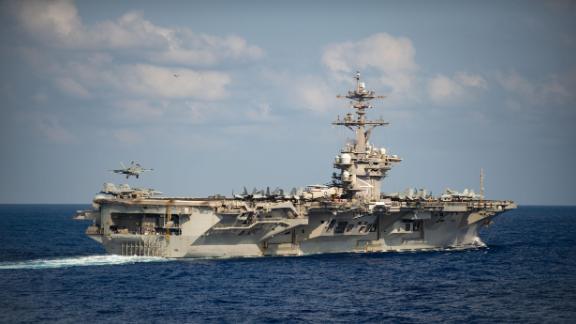 The Acting Secretary of the Navy Thomas Modly blasted the now ousted commander of the USS Theodore Roosevelt as "stupid" in an address to the ship's crew Monday morning, in remarks obtained by CNN.

Defense Secretary Mark Esper told acting Secretary of the Navy Thomas Modly that he must apologize for his remarks slamming the former commander of the USS Theodore Roosevelt, two US officials tell CNN, prompting Modly's late-night about-face apology which was issued just hours after he defended his comments to the aircraft carrier's crew.

One official said Esper's staff communicated to Modly that he needed to apologize.

Modly told the crew Monday that their former commander, Capt. Brett Crozier, was either 'too naive or too stupid' to be in command or that he intentionally leaked to the media a memo in which he warned about coronavirus spreading aboard the aircraft carrier and urged action to save his sailors, according to remarks obtained by CNN.

The acting secretary also accused Crozier of committing a 'betrayal' and creating a 'big controversy' in Washington by disseminating the warning so widely among Navy officials.

Modly initially defended his remarks in a statement Monday, issuing a statement that said, 'I stand by every word I said.'

However, hours later on Monday evening, after top members of the House Armed Services Committee began calling for his resignation, Modly apologized to the Navy for his comment.

'Let me be clear, I do not think Captain Brett Crozier is naive nor stupid. I think, and always believed him to be the opposite,' Modly said in his statement. 'We pick our carrier commanding officers with great care. Captain Crozier is smart and passionate. I believe, precisely because he is not naive and stupid, that he sent his alarming email with the intention of getting it into the public domain in an effort to draw public attention to the situation on his ship. I apologize for any confusion this choice of words may have caused.'

Modly also apologized directly to Crozier for 'any pain my remarks may have caused.'

Crozier had written to Navy leadership flagging his concerns about the Roosevelt's crew of more than 4,000, alerting them to the challenges of trying to contain the disease aboard the ship and urgently requesting that sailors be allowed to quarantine on land.

'We are not at war. Sailors do not need to die. If we do not act now, we are failing to properly take care of our most trusted asset: our Sailors,' Crozier wrote in a memo that three US defense officials confirmed to CNN.

When asked about the comments on Monday, President Donald Trump said he 'may just get involved.'

'I haven't heard it exactly, I heard they heard,' Trump said, referring to the crew of the USS Theodore Roosevelt. 'I heard they had a statement that was made, if that were the statement, it's a strong statement.'

At least 230 sailors board the Roosevelt have tested positive for coronavirus as of Tuesday morning, an increase of 57 cases since the day before.

Hi: 76° Lo: 65°
Feels Like: 60°
More Weather
A weak front will move out of northwest Missouri and northeast Kansas Sunday morning giving the region a slight chances for showers before sunrise. A southeast wind will pick up Sunday around 10 to 15 mph, sunshine will return, and temperatures will warm into the upper 70s.