States are burning through medical supplies and struggling to find more 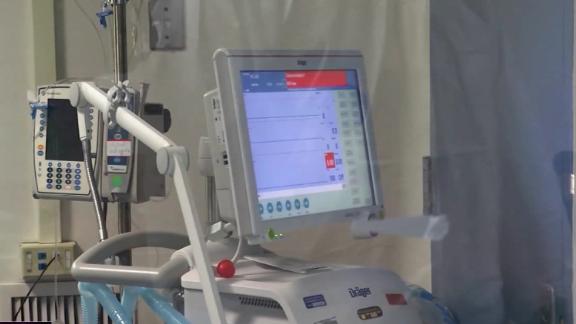 Doctors at University Hospital of Brooklyn, New York, explain the dire need for ventilators in the battle against the coronavirus pandemic. CNN's Miguel Marquez reports.

After weeks of warning about frustrations and roadblocks to shoring up medical supplies, some state and city leaders are now warning they are dangerously close to running out as the number of coronavirus cases ramps up.

States that are struggling with increasing coronavirus cases are burning through their stock of personal protective equipment and struggling to acquire more after the federal government directed states to find their own after the Strategic National Stockpile has been nearly emptied.

The lack of protective equipment directly impacts the safety of frontline workers. Two of the largest health systems in Michigan's infection epicenter in the southeastern part of the state, Beaumont Health and Henry Ford Health System, said Tuesday more than 2,200 staff members combined have been affected by Covid-19.

Henry Ford's CEO Bob Riney called the procurement of supplies a "daily battle" on a call with reporters Monday, citing daily shortages of isolation gowns, intended to protect health care workers from the transfer of fluids, as an increasing concern.

"One day we're feeling okay about (N95) masks, and then two days later, we're worried that we may only have supply for a day or two more," he said.

"We are never going to solve this problem if states are continually forced to bid against each other and against the federal government," Kelly said "It is creating widespread confusion among all the state suppliers, and it is delaying every state's response effort, including Kansas ... it is also driving up the cost of PPE tremendously for every state."

The amount of supplies states and hospitals need is staggering.

Pritzker said that what his state was sent from the Strategic National Stockpile was a "mere fraction of what we asked for."

When asked about state governments competing with the federal government for supplies, Trump denied it was happening.

"We're getting great prices on equipment, and we're helping the states, and the governors are very thankful. Mike Pence had a call yesterday -- every governor was on the call. It was like a lovefest. They're very happy. I don't know if they tell that to the press. Some of them don't, some of them will never say good to the press, but they know we've done a great job."

"I think we're reaching a level where it's going to start coming down, where it's going to start sloping down," Trump said about the number of new coronavirus cases in the US. "The good thing is that the number of beds needed -- I think we were right about that. I was right. My group was right. They're not needing nearly as many beds as they thought. They're not needing as many ventilators as they thought."

The President added, "Everyone is in great shape from the standpoint of ventilators."

Earlier this week, Kentucky Democratic Gov. Andy Beshear called on people in his state to donate PPE because of shortages.

"I know we still have more PPE out there, and we need it. This is a call to action, and you all have responded, but I know there's more," Beshear said during a news conference Monday. "Almost every lead we get is like going down a rabbit hole, or it is diverted by the federal government or to a different place."

"Health care facilities continue to make dangerous decisions and recommendations on the distribution and use of PPE to staff, informed by the supply shortages not science," the association, which represents over 23,000 nurses and health professionals, wrote in the fifth letter they've sent to Republican Gov. Charlie Baker.

The state is expecting a surge in coronavirus hospitalizations between April 10-20, according to recently announced projections by the state.

Even states that have the ability to lend out ventilators are struggling. Over the weekend, Oregon announced it had the necessary number of ventilators to treat Covid-19 patients, but indicated that the state was still struggling to make ends meet with critically needed PPE.

Per the state's daily situation report, Oregon has received just 18% of surgical and N95 masks it requested to date, noting, "Projected patient influx to Oregon hospitals in the coming weeks if infection rates continue will cause significant surge and personal protective equipment (PPE) shortage throughout the region."

Hi: 90° Lo: 67°
Feels Like: 75°
More Weather
A cold front will move through Wednesday night into Thursday giving the chance for showers and thunderstorms across the area. Temperatures will remain in the low 90s through Saturday.