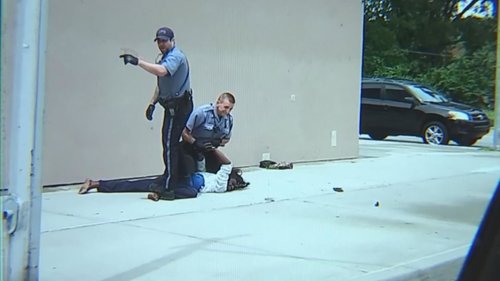 JACKSON COUNTY, MO (KCTV/KSMO ) -- Two Kansas City police officers have been indicted in connection with an excessive force case that stemmed from the arrest of a transgender person on May 24, 2019.

Officers Matthew G. Brummett, 37, and Charles Prichard, 47, have each been charged with fourth-degree assault for recklessly causing physical pain to Breona Hill, also known as Briya or Bryan Hill, by slamming her face against the concrete sidewalk, kneeing her in the face, torso and ribs, and forcing her arms over her head while cuffed.

Fourth-degree assault is a misdemeanor.

Prosecutor Baker stated that her office had to put case before the grand jury after the KCPD declined to give the prosecutor’s office a probable cause statement, the affidavit normally submitted by a detective at the end of an investigation.

“This case is particularly disappointing that my office was prevented from filing the charge independent of a Grand Jury,” Baker said in a press release. “Several years ago, my office shifted our policy so we only engaged the grand jury on cases where a credibility determination must be made. This policy change was in the interest of greater transparency because state law shrouds grand jury proceedings in secrecy.”

“I am grateful for the Grand Jurors close attention to this matter,” Baker said.

She also said she was grateful that a bystander captured the incident on video.

The officers have been summoned to appear before a judge in August.

On Friday night, KCTV5 News received a statement from the law firm representing Officers Brummett and Prichard. It said, in part, "They vehemently dispute the basis of these charges and believe they will be ultimately exonerated in Court." You can read that full statement by clicking here.

"I was informed today that two officers from the Kansas City, Missouri Police Department were indicted by a Jackson County grand jury. As Chief of Police, it’s my job to hold officers accountable when the facts call for it, and I believe my record as Chief shows how seriously I take that obligation.

In the current matter, involving misdemeanor charges against two officers, I’ve placed the officers on administrative assignment until the outcome of the proceedings. Investigators determined that there was no probable cause to conclude the officers broke the law. That is why our department did not submit a “probable cause” affidavit to the prosecutor.

However, we did submit the entire file to federal prosecutors, the FBI, and the county prosecutor. We do that in every matter where someone could possibly allege a civil rights violation.

All of us want justice. I ask everyone to keep an open mind and let the fact-finding process go forward."

The Fraternal Order of Police Lodge 99 also sent KCTV5 News a statement. It said, in part, "This is yet another example of a politically motivated prosecution that is unfortunately becoming all too common place across our country." Click here to read the full statement from the FOP.

Hill, the victim in the case, was fatally shot in Oct. 2019 in a residence on Hardesty in Kansas City. A defendant has been already charged in connection with that case.

The foreman of the grand jury signed an affidavit detailing the evidence the grand jurors considered in their investigation of the arrest.

The press release from Baker’s office continued at length and said that, according to that affidavit:

“On May 24, 2019, at approximately 12:37 p.m., Officers Brummett and Prichard arrived at the Beauty Essence, Barber and Beauty Supply Store, located at 1319 Brush Creek Boulevard in Kansas City. Prior to the officers’ arrival, Ms. Hill was involved in some form of dispute with an unknown and unidentified 3rd party, which caused her to dial 911 for assistance. At some point, Ms. Hill also requested that the store owner call 911. In doing so, Ms. Hill used slurs and insulted the store owner, who then called 911 to request that Ms. Hill be removed from his store.

Officers decided to arrest Ms. Hill, according to the affidavit, but they stated she resisted arrest and was taken to the ground outside the store. Ms. Hill was taken to KCPD’s East Patrol station and she was issued citations or municipal tickets for trespass, disorderly conduct, resisting arrest, and possession of drug paraphernalia.

According to the affidavit, a man passing by in his vehicle during the arrest said he saw a police officer strike a woman with a closed fist. The woman ends up on the ground and the man used a cell phone to make a video of the incident. The phone video shows Ms. Hill on her stomach with Brummett and Prichard kneeling on top of her torso, ribs, and upper back. In contrast to the officers’ statements, Brummett slams Ms. Hill’s face two times on the concrete and then he drops his knee and a portion of his body weight on her neck/right shoulder area. The officers then complete the handcuffing. Prichard is then heard saying, “[w]e tried to be easy” and “[y]ou made it this way.” Ms. Hill can be heard moaning or crying in pain and asking for help immediately after this.

Moments later, according to the affidavit, someone approaches and is waived away by Brummett. While Ms. Hill is still laying on the sidewalk, Brummett steps on Ms. Hill’s right hip. Prichard picks up her handcuffed hands and pulls/presses them upward until they are in line with Ms. Hill’s head as she is prone on her stomach. The cell phone video footage shows no apparent movement from Ms. Hill prior to her arms being maneuvered in this way. Just before this, Prichard can be heard saying, “[y]ou wanna push more.” In response, Ms. Hill says, “I didn’t push nobody.” Prichard responds by saying, “[s]top it, I’m tired of messin’ with you.” In addition, Prichard, while pulling/pressing her arms upwards, says, “[y]ou’re doing it now.” Again, Ms. Hill can be heard moaning and crying in pain until she goes silent.

In addition, the affidavit stated, a witness took pictures of Ms. Hill’s injuries after she was transported to Truman Medical Center. Those pictures show a cut above her right eye and bruising/burns on multiple areas of her face and specifically on the left side of her face on her nose.”

Please note: This content carries a strict local market embargo. If you share the same market as the contributor of this article, you may not use it on any platform.

Hi: 99° Lo: 68°
Feels Like: 102°
More Weather
Dangerous heat will move into the area today with highs reaching the upper 90s to triple digits. Heat index values will likely be between 100-106. Use caution when spending time outside this afternoon. Hot and humid conditions will continue on Friday with highs back in the upper 90s and lower 100s with heat index values reaching triple digits. A cold front will move through the area Friday afternoon into the evening bringing the chance for a few showers and thunderstorms. Scattered rain chances will continue through the weekend with highs in the lower 90s. Highs in the 80s will return for the beginning of next week.