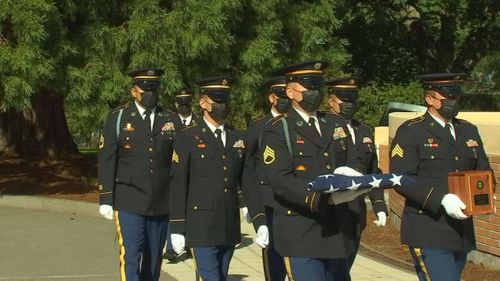 MULTNOMAH COUNTY, OR (KPTV) -- A well-known World War II veteran who belonged to the Band of Brothers was laid to rest on Tuesday with full military honors at the Willamette National Cemetery near Portland.

William T. Wingett—better known as Bill—died earlier this month at 98 years old. Wingett was born in Spokane but lived in Salem for a long time. He died at a home for veterans in Lebanon.

Wingett was one of the last living in what is known as the Band of Brothers. Formally, it was the Easy Company of the 506th Parachute Infantry Regiment of the 101st Airborne Division.

Wingett joined the military right after Pearl Harbor. He served in the Army and was a paratrooper and machine gunner. He jumped out of a plane into Normandy on D-Day and was wounded three times during his service.

During his memorial, the Oregon National Guard played the traditional taps. Wingett comes from a family of veterans. His father served and his four brothers enlisted with him the day after Pearl Harbor.

Please note: This content carries a strict local market embargo. If you share the same market as the contributor of this article, you may not use it on any platform.